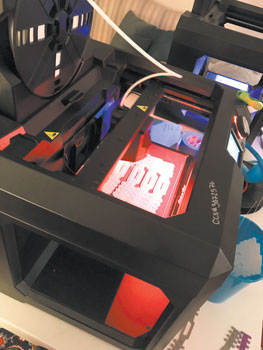 Cumberland County Schools are shut down for the rest of the 2019-20 year, but that hasn’t prevented Jack Britt High School teacher Henrietta Jutson and student Saathvik Boompelli from working together on a project providing needed support to frontline health care workers at Cape Fear Valley Medical Center.

Jutson, an integrated systems technology teacher at Britt, has access to 3-D printers used at the school. Boompelli reached out to Jutson with the idea of putting the printers to use by programming them to print out a clasp that would be attached to masks like those worn by healthcare workers.

Unlike typical clasps that loop over the ears, the ones that Boompelli envisioned go around the back of the head, so they are more comfortable to wear for extended periods of time and don’t put as much strain on the ears.

Jutson has had the 3-D printers at Jack Britt since around 2015. There are a total of three of them, each roughly the size of a refrigerator you’d find in a college dormitory room.

Each printer has a gantry with a filament head that features an X, Y and Z axis.

“It’s like a hot glue gun,’’ she said. The printers are loaded with a roll of plastic, or filament, that Jutson purchased for the project.

The process is a bit time-consuming, Boompelli said, noting that it takes about two hours
to print about five of the plastic clasps.

The Britt printers have produced a total of 350 of the clasps so far, which they’ve donated to Cape Fear Valley.

Boompelli said until the hospital makes a new request for additional clasps, they are looking around to see if there are other area hospitals or frontline care workers that could use the clasps to make protective masks of their own.

“The clasps can be reused and other people are making masks,’’ Boompelli said. “We thought we would focus on this.’’

Boompelli said Jutson recently received an email from the parent of another student thanking her for providing the clasps.

The only problem associated with the project is the plastic filament used to make the clasps isn’t free and has to be purchased. Jutson is using a teacher fundraising tool to help raise money donated to cover the cost of the filament.

The website is known as donorschoose.org. Visit the site and in the search space type in “Henrietta Jutson”, then look for the link entitled Filament for Good.

As of Monday, May 4, the project still needed $280 to help pay for the filament.