There’s one major advantage to being involved in the recreation business at the time of something like the current pandemic.

At least that’s the opinion of Maxey Dove, assistant director of the Hope Mills Parks and Recreation Department.

“It’s one of the bigger fields for leaning on your neighbor,’’ said Dove, who has been doing a lot of that lately. He’s reached out to fellow recreation personnel from programs around the area that Hope Mills competes against, feeling them out for ideas and suggestions on what they are doing during this situation.

“There’s a lot of networking, a lot of communication in parks and recreation that’s beneficial to everybody,’’ Dove said. The problem is there’s also one consistent thing he’s been hearing when talking to his counterparts.
“It’s certainly unprecedented times and unprecedented circumstances,’’ Dove said. “Everybody is kind of learning together.’’ 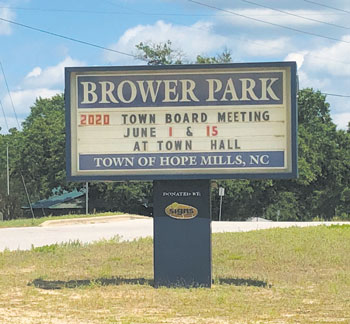 Hope Mills has already been faced with one difficult decision, the cancellation of its entire spring sports program that normally would have stretched well into the summer months.

Sports wiped off the spring calendar include indoor soccer, baseball, softball and wrestling.

Dove and his staff are in the process of refunding registration fees that had already been paid and said it will take roughly three to four weeks to get checks written and returned to everyone who signed up.

The Dixie Youth organization, with which Hope Mills is affiliated, also canceled its annual World Series, but Dove said that was done with good intentions.

In a normal year, teams compete first in the regular season then select an all-star team from their local league to advance into state competition in hopes of reaching the Dixie Youth World Series.

By eliminating the World Series, the Dixie Youth officials hoped to encourage local leagues to play as long a regular season as they could, if they were playing, and not cram a short season together just so they could put an all-star team on the field for the World Series and only allow a handful of players the chance for extended competition.

“It wasn’t just about the select 12,’’ Dove said of the all-star teams.
While Hope Mills is shut down for the spring, Dove said other states are further ahead in opening up their recreation programs for play and some are already on the field for baseball.

However, in talking with officials from other states where baseball is taking place, he said they are observing strict safety precautions that are making the game a lot different from what we normally see.

For example, players aren’t allowed to sit in the dugouts when they’re not on the field. Yellow ribbons are placed along the fence six feet apart to indicate proper social distancing. Each team has its own baseballs and they are bleached every inning or half inning.

Dove said he and his staff at Hope Mills had also discussed some possible precautions they may take if baseball resumes in the fall league at Hope Mills this year.

The fall league is a noncompetitive league for players ages 7-12 designed as a developmental program that doesn’t focus on wins and losses but on getting the players ready for the following spring season.

Dove said some of the ideas discussed are having teams leave the field completely after practice before allowing another team on the field, and possibly having separate entrance and exit gates to the field.

They also discussed counting spectators, and possibly limiting each player to having only a single parent able to come and watch the game. Providing hand sanitizer and disinfecting the dugouts was also considered.

Dove said other states have been trying different things to keep the games as safe as possible. Among them are not allowing players to steal, no high fives between players and coaches and putting the home plate umpire behind the pitcher’s mound to call balls and strikes.

“At a certain point, it’s still a contact sport,’’ Dove said. “They’re doing everything they can to create distance.’’

The next sports season on the calendar is fall, and Hope Mills is trying to take a positive attitude toward being able to compete then and plans to launch fall sports registration in the near future.

The good news is the recreation department has been working toward doing registration online and that will be in place for the fall season, so people won’t have to physically come to the recreation center to sign their children up for competition.

In addition to getting ready for the fall season, the recreation department is making needed repairs and improvements to the Gary Dove Memorial Building at Brower Park. The multipurpose structure was named last April in memory of Maxey Dove’s father. Gary Dove was a long-time coach and leader in the Hope Mills youth sports program.

A new roof and gutters will be placed on the building, along with repairs to the building’s sheet rock. In addition, some of the upstairs space where the Hope Mills Youth Association used to meet will be converted to office space for Dove.

The two-story structure already has a concession stand, restrooms for men and women and a multipurpose activity room used for cheerleading and wrestling.