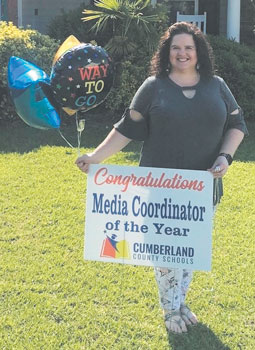 The stereotypical image of a librarian is someone who has a stern visage, repeatedly asks people to stay quiet while studying and chastising library patrons for failing to return books on time.

Pamela Sands is anything but the image of the stereotype, both in how she does her job and in the title itself, which has morphed from simple librarian to media coordinator. Whatever the title, Sands is obviously good at what she does.

For the second time in six years, Sands, who works at New Century International Middle School near Hope Mills, has been named by the Cumberland County Schools as its media coordinator of the year. She now competes for statewide recognition, an honor she previously won in 2014-15.

A native of Pennsylvania, Sands relocated to Cumberland County in 1998 to take a teaching job here. She taught at the high school and elementary school level in the county before becoming the media coordinator at New Century when it opened.

She said the job of media coordinator had always been her dream, even though landing it required her to return to school to get a masters degree in library science.

While some still refer to Sands’ job as librarian or in some cases media specialist, she said the position has changed a great deal from the stereotypical image of what a librarian does.

“It is a more diverse role, really the best of both worlds,’’ she said. In her job, she not only gets to teach children but also interacts with the staff members at her school, helping them in their teaching jobs.
She feels her top responsibility is to instill and inspire her students with a love of reading. But the advance of technology has expanded her role.

“It is also on our shoulders to teach them to be good digital citizens as we’ve moved into the world of being online,’’ she said. “There are a lot of things we teach the students about evaluating information, how to use the information you
find online.’’

Her work with her fellow teachers involves collaborating and sharing resources with them. She is involved in helping her cohorts with professional development, something
she enjoys.

When it comes to the task of encouraging students to read, Sands said she strives to be creative. “We do things out of the box,’’ she said.

She does what she calls book tastings, where she gets students to sample different books in hopes of finding something that inspires them. She also has her students do what she calls book snaps, where they create a snapshot of the book by interacting with the text and putting their personal feelings on what they are reading.

Every year, Sands tries to bring in an author, usually from North Carolina, to meet with her students and discuss the book or books they’ve written. “That sparks a personal connection with the kids,’’ she said. “I always see the kids reignited with their love for books, especially with a book written by a person they’ve gotten to meet.

“I try to keep current with what the kids are interested and involved in,’’ she said. “I’m also a big believer in sharing with staff. As I find cool tools they could use in the classroom or see things that go along with their curriculum I share it with them.’’

Unfortunately, with the growth of the internet, there are some in the business of cutting costs who argue brick-and-mortar libraries filled with books and magazines are things of the past and that we should turn to strictly digital sources of information as a way of saving money.

That kind of thinking saddens Sands, who argues that the printed word is still a critical piece of educating today’s students.

“Children aren’t reading online as much as we think they are,’’ she said. As proof, she notes the circulation of digital ebooks is far outstripped by how often students check out printed works.

“Kids still prefer the printed book,’’ she said. “Making sure we provide these resources is essential.

“The act of reading allows us to have shared experiences. The characters in the books we read, the information we find in books and magazines, helps us find a connection to the world.’’

Sands said that’s especially important now when many people are cut off from the world because of the COVID-19 pandemic. “For our own emotional health, these connections are vital,’’ she said. “I can’t imagine a world without libraries. Who’s going to teach them other than the librarian?’’