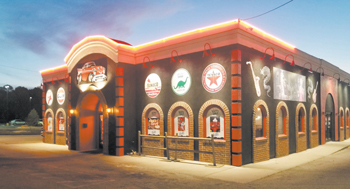 Chef Glenn Garner had planned for an April opening of his new location of The Diner by Chef Glenn and Company on Camden Road.

Unfortunately, the COVID-19 pandemic slowed things down, mainly because of the restrictions in place that made the idea of rolling the restaurant out earlier impractical, since it would not be open to sit-down customers. But Garner promoted interest in the new business by parking his food truck out front while work continued on the new location, serving customers to-go meals from the truck.

Now that the state of North Carolina is gradually reopening and restrictions have been loosened on restaurants, Garner held his official opening of the new location last week. Of course, there will still be limits on how much he can do, the main one being occupancy is limited to half capacity, which in his case will be no more than a maximum of 113 customers inside at one time.

“It’s for a good reason and I understand that,’’ Garner said of the restrictions. "But I don’t think a lot of places are going to open until Phase 3 starts off.’’

Phase 3 is the next stage of reopening under the limits set down by Gov. Roy Cooper that will allow businesses like restaurants to return to more normal operations.

Although they aren’t required, Garner will promote the wearing of masks in his new business. He will also be required to sanitize the tables after each group of customers leave. To comply with social distancing, no customers will be seated at adjacent tables or booths, leaving unoccupied spaces as a buffer to allow proper spacing between everyone.

Garner admitted he’s concerned if he’ll be able to even reach 50% occupancy with any regularity. He has visited other restaurants in anticipation of opening his and said many of them are not half full. “I think they are shell-shocked,’’ he said of potential customers.

Garner has set his hours for Tuesday through Thursday from 7 a.m. until 10 p.m. Friday and Saturday he’ll be open 7 a.m. until 11 p.m., closing on Sundays and Mondays. The diner offers a brunch on Sunday from 10 a.m.-3 p.m.

His aim with the new restaurant is to give Hope Mills diners the most varied and upscale menu available anywhere in town, and he thinks it will rival or exceed offerings they can get from specialty restaurants along Fayetteville’s McPherson Church Road, the town’s unofficial restaurant row.

Just a sampling of what Garner will be serving includes seafood, steak, prime rib, chicken and oysters.

The decor and theme of The Diner is 50s and 60s. Both the inside and outside of the building are decorated with signs and displays highlighting that era.

In addition to the main seating area, Glenn will offer a private dining room for any group of 10 or more people that can seat up to 100.

It will be available for parties or any kind of group meeting. Anyone interested in using it needs to make a reservation at least 48 hours in advance.

As for Garner’s old location in downtown Hope Mills, it will close temporarily while he’s getting the new business open, with plans to reopen the downtown business sometime over the next quarter. The location on Main Street, formerly known as Becky's Cafe, will be renamed Just Breakfast by Chef Glenn and Company. It will open Monday, June 22 from 6 a.m.-2 p.m. The number is 910-929-2520. It will be open Monday through Saturday.

For further information on either location, Garner can be contacted at 910-705-2664.