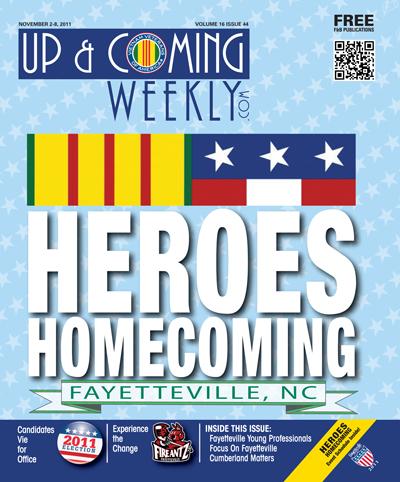 In 2002, when the ﬁrst Soldiers began to return from Afghanistan, the nation was awash in yellow ribbons and American ﬂags. Nowhere was that more obvious than in Fayetteville.

Fayetteville is the home to the more than 50,000 troops who are assigned at Fort Bragg and Pope Army Airﬁ eld. It is also the home of the XVIII Airborne Corps, the 82nd Airborne Division and the U.S. Army Special Operations Command. It has been said that when the world dials 911, the phone rings here at Fort Bragg.

The families of the soldiers who were going in and out of Afghanistan, and later Iraq, showed their support for their soldiers while they were deployed in very visible ways. And upon their return, the community welcomed them with open arms.

Flash back 40 years, and it was a totally different story.

In the late ‘60s and early ‘70s the streets of Fayetteville were also awash in a sea of uniforms. Hundreds of thousands of young men came to Fayetteville prior to shipping out to Vietnam and stopped there upon their return.

This close association with the military and the Vietnam War resulted in Fayetteville’s unfortunate moniker, Fayettenam. And, in its heyday, the name ﬁt.

The soldiers, many of whom underwent training at Fort Bragg, went off to ﬁght on foreign soil, and returned home to turned backs and protesters. Unlike their predecessors in World War I and World War II, there were no ticker-tape parades and the nation did not embrace them.

Today, Fayetteville is seeking to change that by hosting Heroes Homecoming, a 10-day homecoming celebration for Vietnam veterans that will culminate with a parade down Hay Street on Veterans Day.

According to organizers, Fayetteville created Heroes Homecoming as a way of showing all Vietnam veterans that they remember and appreciate their courage, their sacriﬁ ce and everything they’ve done to defend freedom — now and forever.

And just as they have shown today’s soldiers an outpouring of love, the city is pulling out all of the stops to show that love and thanks to the veterans they hope will travel to the city to take part in a celebration that many believe is long over due

.The event ofﬁcially kicks off on Nov. 4, with an opening ceremony at the N.C. Veterans Park Amphitheatre at 10 a.m. And then a dizzy array of events follows for the next 10 days.

Throughout opening day and the remainder of the month, you can check out a variety of exhibits at Fayetteville’s many museums. 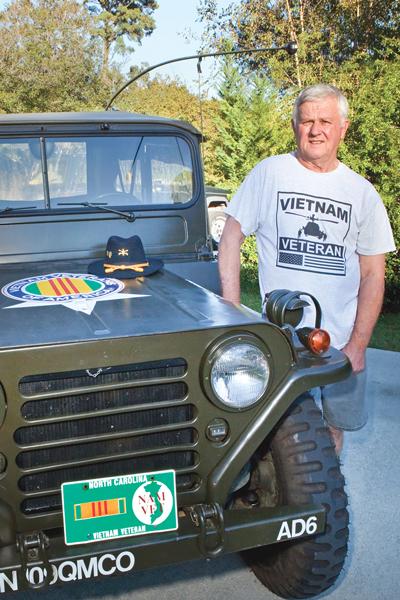 At the Arts Council of Fayetteville-Cumberland County, you can take in the Vietnam Photography Project and Witness: The American Vietnam Experience, as told by local Vietnam veterans and native-born Vietnamese. At the Museum of the Cape Fear, you can peruse Voices of the Vietnam War and, on Fort Bragg, the John F. Kennedy Special Forces Museum is home to numerous exhibits focusing on Special Forces involvement in Vietnam.

The Airborne and Special Operations Museum, and the adjacent N.C. Veterans Park, can be considered ground zero for the celebration.

On Nov. 6 at 8 a.m., The Vietnam Moving Wall will be escorted to the museum by the Fayetteville Police Department and N.C. Rolling Thunder Chapter 1. At 3 p.m. a Salute to Veterans ceremony will ofﬁcially open the parade field, featuring ﬂags representing veterans from all services. The Vietnam Moving Wall will also be open to the public at this time.

The half-size replica of The Vietnam Wall in Washington, D.C., will allow visitors to experience seeing the more than 58,000 names of those service men and women who lost their lives during the Vietnam War. Rolling Thunder volunteers will assist with locating names for visitors. The Vietnam Moving Wall will be on the museum grounds and open to the public 24 hours each day from Nov. 6 through noon on Nov. 14.

The Airborne and Special Operations Museum Foundation is selling 30-inch ﬂ ags ($5) to be displayed on the museum’s grounds from Nov. 6-14. According to Paul Galloway, executive director of the museum’s foundation, this year Vietnam veterans will be honored in a special way. “We are going to separate the Vietnam veterans’ ﬂ ags by putting them in a place of honor directly in front of the Moving Wall. We feel this will help give these veterans the added recognition they deserve.”

Throughout the week the museum foundation will show free movies, such as Operation Dumbo Drop, The Green Berets, Platoon, Hamburger Hill, We Were Soldiers and Good Morning Vietnam.

“Before each showing there will be special guest speakers who are associated with that particular movie,” said Galloway. “We are especially pleased to be able to feature Adrian Cronauer, the U.S. Airman who was a DJ in Vietnam, before Good Morning Vietnam.”

All movies are free and open to the ﬁrst 250 reservations.

On Nov. 11, a POW/MIA Vigil and MIA Recognition Ceremony will take place. Every hour on the hour the meaning of the Missing Man table will be explained and bios of current Vietnam MIAs will be read. This will take place from noon to 8 p.m.

On Saturday, Nov. 12, the day will begin with a Veterans Day Service and Wreath Laying Ceremony at the Vietnam Memorial at 10 a.m. A second ceremony will be held at 11 a.m. at the N.C. Veterans Park. This is the ofﬁ cial North Carolina Veterans Day celebration. 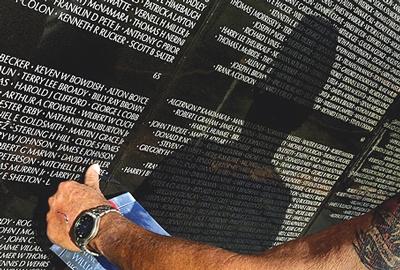 On Saturday, Nov. 12, events will be ongoing throughout Fayetteville’s historic downtown, but perhaps the most anticipated event is the Heroes Homecoming Veterans Day Parade at 11 a.m. All Vietnam veterans are welcome to participate in the parade.

One veteran who will be on hand is Rossy Nance. He is a Vietnam veteran who proudly served in the Air Cavalry. Nance, the vice president of the N.C. Vietnam Vet Association, will be driving a restored Vietnam-era jeep and trailer in the parade.

For a complete calendar of events, visit www.heroeshomecoming.com or see the schedule located on page 11.

Photos: middle left; Rossy Nancy, vice president of the N.C. Vietnam Vet As-sociation, will be one of the many Vietnam veterans who participate in the Veterans Day Parade. Bottom right; The arrival of the Moving Wall in Fayetteville will be an integral part of the Heroes Homecoming Celebration.