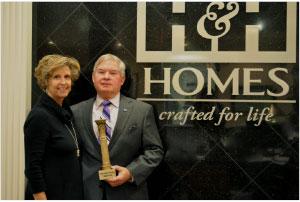 Fayetteville Developer D. Ralph Huff III has added his voice to those in support of Fayetteville’s $35 million Parks & Recreation Bond Referendum March 15. He’s imploring more than 200 friends and fellow business people to support and vote for the issue. The Greater Fayetteville Chamber is also on board. “This makes business sense,” Chamber Chairman Brian Kent says. The Fayetteville Regional Association of Realtors also endorses the referendum in a resolution “encouraging citizens of Fayetteville to support these investments in our community.” Local sources also indicated that the Fayetteville Home Builders Association would more than likely support the bond referendum.

“This is a call to action from me to the people that I know and respect and I’m asking you to join me by coming out publicly for the local parks bond,” Huff said in a mass mailing. Ralph and Linda Huff are recognized in North Carolina as respected business and community leaders and philanthropists. They’ve built more than 4,000 homes as well as commercial and multi-family developments. In his letter, Huff notes that Fayetteville has fallen behind Raleigh, Durham, Greensboro, Winston-Salem, Asheville and Wilmington in the development of community amenities.

Mayor Nat Robertson says he is grateful for Huff’s support. “Mr. Huff’s commitment to Fayetteville is evident by his investments here. He understands that for our community to grow, and for us to be competitive, our amenities also have to be equivalent to what our peer cities offer,” Robertson said. Huff contends the lack of amenities resulted in many military families who relocated from Atlanta following the 2005 Base Realignment and Closure Act choosing not to live in Fayetteville. Huff knows the real estate market intimately and contends enlisted military families and officers “are choosing Whispering Pines, Aberdeen, Pinehurst, Carthage, and Seven Lakes,” to live rather than Fayetteville.

The letter also addresses objections some have raised. He cites an unnamed former city council member quoted as saying “Why build more parks and pools……?”  His response: “We need a better place to live for all of our citizens.”  He also notes that with the closure of Dark Branch Swim and Racquet Club there are 1,000 families which no longer have a convenient place to swim and play tennis.

Huff is not completely supportive of some of the projects in the bond issue. He favors a safer place in the old Fayetteville area for tennis courts and a pool. “I do not consider Mazerick Park to be that location.” He says he’s only heard objections from one respected business leader/friend who doesn’t agree with him because he thought it should be more specific. “I for one would have been more aggressive than the current council, but at least we have a good beginning,” Huff said. The N.C. Homeowners Alliance, the Fayetteville Regional Association of Realtors and the Home Builders Association of Fayetteville will conduct a forum on the referendum at a luncheon March 10 at the Kiwanis Recreation Center, 352 Devers St.

Fayetteville City Council voted unanimously in December to hold the referendum. Proposed projects include two senior centers, a tennis complex, a sports field complex, two skateboard parks, a Cape Fear River park, seven splash pads and several neighborhood park improvements. Passage of the referendum would result in a maximum ad valorem tax rate increase of $.135 per hundred dollars of property valuation.  Huff points out that’s $20 a year for the average home in Fayetteville. That’s the cost of attending a movie, or buying three packs of cigarettes. As for the cost of floating a bond, “Today’s interest rates are lower than they have been in my 40 years in the business,” he says.  Huff adds “My partners, my bankers and I own $145,000,000 worth of real estate in this country” and a tax increase affects few people more than me.