The Animal Called POW Opens at the ASOM

The Animal Called POW, a special exhibit, opens at the Airborne and Special Operations Museum on Friday, Feb 10. 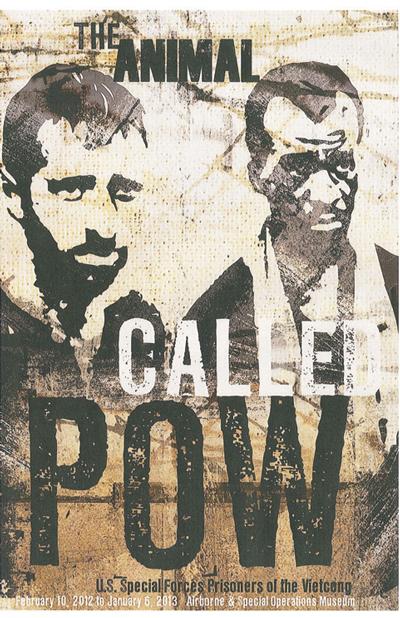 The temporary exhibit is sponsored by the Directorate of Plans Training and Mobilization (DPTM) and the Airborne and Special Operations Museum Foundation. It focuses on educating the public about the prison camps in South Vietnam and the horrors the soldiers incarcerated in the camps faced. The exhibit runs through January 2013, and takes a hard look at rescue missions, Survival, Evasion, Resistance and Escape (SERE) training, as well as current prisoners of war. Dr. Nicole Suarez, curator at the Airborne and Special Operations Museum, says that this has been the most worthwhile exhibit that she has worked with.

“People aren’t aware that there were prisoners of war in South Vietnam and our mission is to inform and educate the public about it,” Suarez says.

Colonel James “Nick” Rowe, a U.S. Army ofﬁ cer, is a main discussion point in the exhibit. He was one of only 34 prisoners to escape during imprisonment in the Vietnam War. The exhibit displays a replica of the “tiger cage” that housed the soldier while he was held captive. Rowe, who retired following his escape, was later recalled to active duty to use the lessons he learned during his struggle to survive to create the SERE training that is still taught to high-risk personnel in today’s armed forces.

In 1989, Rowe, who was assigned to the Joint U.S. Military Advisory Group in the Philippines, was assissinated on the morning of April 21, 1989, as he was being driven to work in an armored limousine. Rowe’s vehicle was hit by gunﬁre from a .45 caliber pistol and an M16 riﬂe. Twenty-one shots hit the vehicle; one round entered through an unarmored portion of the vehicle frame and struck Colonel Rowe in the head, killing him instantly. He is buried in Arlington Cemetery.

Visitors will get a glimpse of what it was like to live in these prison camps by viewing an immersive indoctrination hut, which replicates the one used in “Force of Darkness” in South Vietnam.

“A prison camp has been created inside the exhibit for the public to walk through and understand what it was like for these soldiers,” Suarez adds.

The walls of the exhibit are made of bamboo, which offers a more realistic approach to the public. A display of actual artifacts from the POWs is also on display, as well as a section of the exhibit that shows movie clips related to POWs throughout the years. The public will gain some knowledge and hear of lessons learned from the prisoners of war and the escape attempts that they made. Suarez also added that as visitors walk through the exhibit they hear the POWs’ stories in their own words. This allows visitors to have a more realistic experience. “I think the general public can take something away from viewing this exhibit,” Suarez says.

The Airborne and Special Operations Foundation was inspired by the Heroes Homecoming celebration in Fayetteville last year, which honored Vietnam Veterans. The group created this exhibit to acknowledge and praise these veterans’ stand for sacriﬁ ce, teamwork and victory. The mission of the organization is to provide a unique and educational experience on U.S. history and basic core values of airborne and special-operations soldiers. The organization members want to preserve interpretation and recognition of U.S. Army airborne and special-operations history, equipment, technology, legend, art and weaponry.

The main exhibits in the museum are the Early Airborne exhibit, World War II Exhibit, Korea and Cold War exhibit, Vietnam exhibit and Contingency Operations and Training exhibit. Set up in a chronological manner, visitors travel through time, beginning in the 1940s.

The museum also includes a theatre and simulator where visitors can gain a more virtual experience.

Admission to the Airborne and Special Operations Museum is free, however, donations are accepted. Doors to the museum are open from 10 a.m. to 5 p.m. Tuesday through Thursday and on Sundays from noon to 5 p.m. The museum is closed on Mondays. Volunteers are always welcome and contribute to the success of the museum. For more information about the museum or any volunteer work, contact the museum at 910-643-2766 or email at info@asomf.org.