Liberty Luminaries Honor Those Who Serve 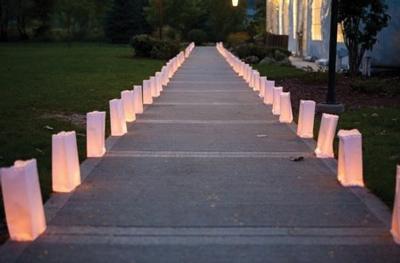 In a town of people, most of whom have military connections, it is only fitting that the local service organizations take action to honor them. On July 1, the Fayetteville Pilot Club, a global international organization of executives, businesses and professional leaders working together to improve the quality of life in local communities and throughout the world, will salute the men and women who serve in the armed forces by lining Ray Avenue with Liberty Luminaries following a performance of patriotic music by the North Carolina Symphony and a finale of fireworks.

Nettie McQueen, a member of the Pilot Club, explains the inspiration for the event as the club has been doing it for the past few years.

“For a long time we were looking for different ways to honor the military, to celebrate all they’ve done for us,” said McQueen. “It sort of evolved from one project to another. We just borrowed ideas from other pilot clubs around the state. Many of them do luminaries for different things and we just decided it would be a good way to do our project for them, and it kind of grew.”

As with any event, the fi rst attempt did not go smoothly. McQueen recalls the first Liberty Luminaries the Pilot Club held in honor of Memorial Day.

“It was small at first, and our first one was down by the Airborne Museum. We barely got them lit and we had a huge thunderstorm,” she recalled.

In a stroke of serendipity, the misfortune of the Memorial Day weather that continually befell the program lead to a partnership that improved the event. “One (Liberty Luminaries) we had to postpone. We started out on Memorial Day and again the weather was a real problem so we ended up closer to July, and then we found out the symphony does a patriotic concert down at Festival Park, and they do fireworks afterwards and it just seemed like a perfect combination. A good way to end the evening with a silent tribute after all the music and fireworks,” said McQueen.

As a whole, the luminaries stretch out across the park in a beautiful and often touching display of light, but each individual luminary also contains the symbolism of the celebration. McQueen explains, “…the light inside the luminaries refl ects the gratitude we feel towards the military for giving us the freedoms that we have. We wouldn’t have a birthday if we didn’t have people who fought for it. The red, white and blue ribbons at the top of the luminaries represent their service to our country.”

The Pilot Club also allows people to honor specifi c individuals by purchasing a luminary in their name for $5, which is the most touching part of the event McQueen says. “It will be a wonderful silent tribute that will end a lovely evening.”

Forms to purchase luminaries are available at www. pilotclubfayetteville.org. The event will be held on July 1, on Ray Avenue from 8:30 to 10 p.m., following a performance by The North Carolina Symphony and a fi reworks display.