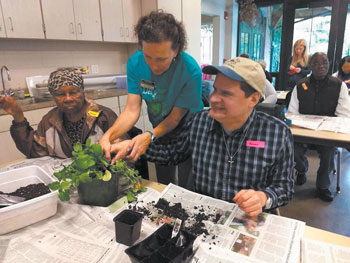 The Vision Resource Center has been around since 1936, but it incorporated in 1939. In 1936, a group of Sunday School teachers got together and decided they were going to become The Association for the Blind. In 1939, they incorporated and worked with the Department of Social Services to become The Center for the Blind. The Vision Resource Center was one of the first four United Way of Cumberland County agencies. Since then, the organization has worked to make life for the visually impaired in the community better.

“Currently we have 676 blind and visually impaired adults and kids in Cumberland County,” said Terri Thomas, executive director of the VRC. “Right now, we are actually working with 250 of those individuals; 230 of them are adults, and 20 of them are kids.”

Thomas added that there are a lot of blind and visually impaired individuals in the county that the VRC does not know about as those individuals are not on the blind registry.

These are exciting times for the VRC, as the organization moves from the Dorothy Gilmore Recreation Center to its new home on Cedar Creek Road. “I would like to thank the city for allowing us to be in the Dorothy Gilmore Recreation Center for 10-plus years,” said Thomas. “Without them, we would not have been able to expand into what we have become now.”

VRC was previously housed in a 199-square-foot facility at the Dorothy Gilmore Recreation Center. The new facility is a 2,700-square-foot building on 7 acres of land located at 2736 Cedar Creek Rd.

“Now we are going to be able to provide more things within our own location,” said Thomas. “We will have assistive technology skills training, our own gym, a kitchen for cooking classes, a conference room and more.” 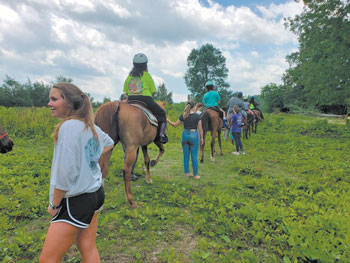 Thomas added that the benefit of the VRC having its own facility is that the blind and visually impaired will have more opportunity for freedom and independence. They will be able to enjoy a cup of coffee, play games, listen to music, sit in a rocking chair and listen to the birds chirp. They have a place they can come to that’s outside of their homes, where they can stay as long as they want to and go home when they want. Thomas noted that this is one of the benefits of having a house — the therapeutic nature of the space.
“We now have a conference room area for the National Federation for the Blind to meet in, and we have families with support groups,” said Thomas. “Our blind and visually impaired members have a place that they can come and hang out instead of … sitting at home by themselves.”
Thomas has been executive director of the VRC for nine years and has fought for many of the things these individuals have needed.

“Everything that we do to enhances their lives deals with mind, body and spirit.”

Thomas added that VRC believes in wellness and in incorporating a lot of physical fitness for those who are physically able to participate. “We do exercise classes, ensure they do their elliptical, treadmill, ride bikes, walk at the John D. Fuller Recreation Center and other activities,” said Thomas.

“Our next thing is socialization, which is key (for) people who are visually impaired because they don’t really get out, and they are not around people like them,” said Thomas. “They talk about how their family does not get it and (how) being around other blind people is something that they strive to do.” 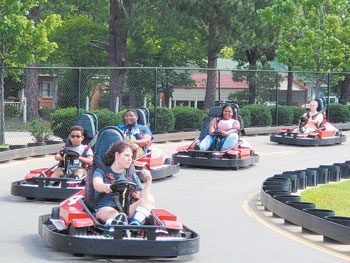 Some of the activities with VRC include going to plays, eating lunch at various restaurants, visiting the beach, surfing, horseback riding, arts and crafts, making pottery, and visiting the Cape Fear Botanical Garden, Durham Performing Arts Center in Durham, PNC Arena in Raleigh and more.

“The core of all of it is more about the socialization and camaraderie between people that have a (similar) disability,” said Thomas. “We’ve made the things that seem impossible possible by doing whatever we can to make whatever activity they enjoyed when they had sight, the same way without sight.”

The VRC will host Out of Sight Night at the Park Saturday, Sept. 21, from 6-10 p.m. at Segra Stadium. It’s the seventh annual “Out of Sight” fundraising event for the organization.

“We will have heavy hors d’oeuvres, vendors, activities, the Guy Unger Band, and a Game of Chance,” said Thomas. “Cocktail attire will be the attire this year.”

Thomas said there will be a different spin on the silent auction this year called the Game of Chance. Participants will be able to pick their fate with what kinds of gifts they like instead of writing down how much they want to pay for it. 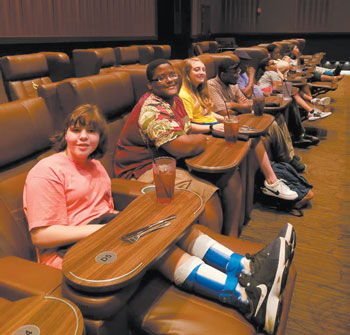 “This year, instead of individuals wearing blindfolds, we are going to purchase glasses that have different levels of visual impairments; a sponsor will be supporting those,” said Thomas.

“As you walk around with your glasses, you will be able to see what it is like with different visual impairments. We have to educate people on what blind and visually impaired is not,” said Thomas. “It is my duty to make sure the Fayetteville community knows all about it.”

Tickets for Out of Sight Night at the Park cost $75. Segra Stadium is located at 460 Hay St. For more information, visit the website at
www.visionresourcecentercc.org or
call 910-483-2719.