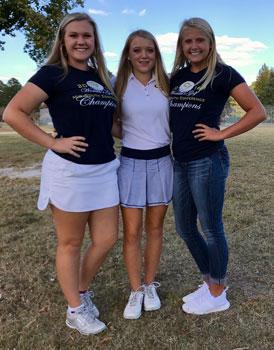 Todd Edge knew on paper his Cape Fear girls’ golf team had a chance to be good this season, but now that the regular season is over, even he’s shocked at how good it was.

“I thought we had the capacity of shooting around 260 (for a weekly round),’’ Edge said. The Colts eclipsed that number in four of seven regular-season matches, featuring a low round of 249 at Cypress Lakes.

They ended the regular season with a 1,802 stroke total, well ahead of second-place and perennial Cumberland County golf power Terry Sanford.

Toni Blackwell, Mary Catherine Hales and Hallie Ross led the charge for Cape Fear, taking three of the top four individual spots in the final standings. Blackwell was named the league’s Player of the Year, the only golfer to break 80 for the season with a 78.6 stroke average.

Edge, league Coach of the Year in his eighth season as Cape Fear girls’ golf coach, said this year’s team is the result of the work he’s done to practically build a program from scratch.

That’s not the easiest thing to do, he noted. “Not many people want to go on a five- or six-mile walk on Monday carrying a golf bag,’’ he said. “Most of the girls I come in contact (with) have picked up a club or played with their fathers. There have been a few I recruited who have never touched a club.’’

Blackwell, a sophomore, has played in a number of tournaments outside the high school arena, Edge said. “She’s starting to come into her own. She’s striking the ball and making good decisions.’’

Blackwell isn’t surprised at how well she and her teammates played this season. “I thought we would just keep breaking records like we’ve been doing,’’ Blackwell said. “I think our mental game has gotten a lot better.’’

She added that in addition to her mental game, her chipping and putting have improved. “I’m trying to get more one-putts,’’ she said, “more birdies to drop, getting on the greens.’’

Hales is one of those players who had never played before when she came out for golf. Edge said she’s cut 10 strokes off her average. “She’s conscientious about practice and doing it right every time,’’ he said.

Hales said she’s tried to focus on improving distance and accuracy, along with putting. “We’re all working more as a team than as individuals,’’ she said. “We’re trying to help each other more.’’

Ross is the veteran of the group, a senior who has been with the Cape Fear program all four years. Edge said Ross got little playing time as a freshman but has dropped her scoring average about eight strokes and this year became a factor in scoring.

Both Ross and Edge agree that having Baywood Golf Club in the Cape Fear community has been a big help to the program.

“We practice every day, and it’s only five minutes from the school,’’ she said. “I live here, and it’s really helpful. People at the course work with us very well.’’

By the time this story appears in Up & Coming Weekly, Cape Fear will have already played in the 3-A East Regional at Reedy Creek Golf Course in Johnston County.

Edge would love to see his team follow in the footsteps of his 2013 squad and qualify for the state tournament, but he knows that won’t be easy.

“They only take three teams and 24 kids from the regional,’’ he said. “It’s not playing other teams, it’s playing the course to the best of our ability.’’

If Cape Fear does make the state 3-A tournament, it will be held at Foxfire Golf and Resort Oct. 23-24.