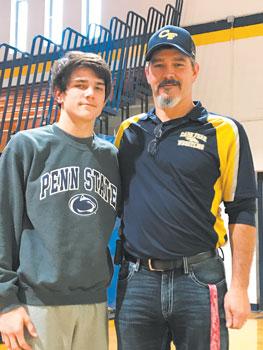 Three Cumberland County high school wrestlers brought home state championships this month, and for each, it was a special journey.

Pine Forest’s Daniel Peede finally attained the 4-A 152-pound championship after a painful near miss last season and battles with confidence this season.

Heath Wilson won his state title for Cape Fear in 1990 and spent the last 11 years watching son Dallas work for his chance at a championship.

“He’s probably the biggest part of it,’’ Dallas said of his father. “Every day after practice, he takes me home and we have conversations in the truck. We fantasized about the day I’d win a state title, and it happened.’’

The atmosphere at the titles won by father and son were much different. Heath won his in the confines of the gymnasium at Greensboro’s Grimsley High School. Dallas found himself in the parade of champions before the state finals, inside the cavernous Greensboro Coliseum.

“My butterflies were going crazy,’’ he said. “I got my head right and he told me to relax.’’

Dallas did have to overcome a scare at the state finals when he injured his ankle during the semifinal match and felt it go numb. “It was hurting bad,’’ he said. “I was warming up for the finals and I don’t know how I’m going to wrestle. Adrenalin took care of it and I stuck it out for one more match.’’

He may miss baseball season recovering from his injury, but he plans to hit the summer wrestling circuit to start preparation for next season.

“I do have bigger goals than just the state tournament and state titles,’’ he said.

That doesn’t surprise his father. “He’s looking for the next hill to climb,’’ Heath said. “It’s not a state championship. It’s a national title. After that it will be something else. And I’ll continue to be impressed.’’

Vernagallo continued to impress, too, putting together his second consecutive unbeaten season and second straight state title for the Colts.

He admitted the pressure of going unbeaten for a second straight year began to get into his head as the season progressed.

“I had to stay focused and know what I did would work,” he said.

Vernagallo has already signed to wrestle for Clarion University in Pennsylvania next season. He plans to redshirt and compete at the 174-pound level the following season.

He chose Clarion because of its wrestling culture. “Wrestling is huge there,’’ he said. “Everyone up there loves it. They even have cheerleaders. I want to work on being stronger, making my technique better and getting ready for the college scene.’’

Getting ready for college was a concern of Pine Forest’s Peede. After losing in the semifinals of last year’s state tournament by a single point, he was anxious to capitalize on his final chance at a state title.

“I had a lot going on with school and college applications,’’ Peede said. “It was definitely a busier time.’’

He had other concerns. Just before the conference tournament, he suffered a back injury. He had to manage pain as he recovered and tried to fight his way back to the state tournament. “This year, the big thing was to get there and win it, taking everything one match at a time,’’ he said.

He didn’t stumble in the semifinals this season, maintaining positive thoughts and pinning his semifinal opponent in just 1 minute, 13 seconds en route to reaching the state finals.

I had to go out there and stick to what I knew and the things that got me there,’’ he said.

He plans to wrestle at the college level, but he’s not sure where. He’s waiting to hear back on an appointment to the United States Military Academy at West Point. If accepted there, he plans to walk on to the wrestling team.

He’s also being recruited by Virginia Military Institute, where they are considering him for a partial scholarship. A four-year ROTC scholarship would cover the rest of his expenses there.

“I want to thank my coaches, teammates and family for the support,’’ he said. “I want to give a big shoutout to coach Charles Daniels. I appreciate all the time and effort he’s put in to me.’’