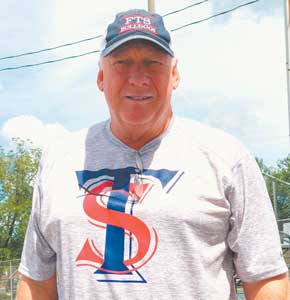 A local dentist asked if he’d like to play golf on Sunday afternoon.

Yeager explained he couldn’t because he had to review film from the previous Friday’s game and then review film of the next opponent to formulate a game plan.

The dentist looked at

Yeager and said, “Wow, you guys take this stuff seriously, don’t you?”

For 50 years, since he was a freshman at old Alexander Graham Junior high in downtown Fayetteville, Yeager has taken football seriously.

You can still see him on the practice field at Terry Sanford and on the sidelines on Friday night, coaching, cajoling and cheering on another generation of young men playing the game.

For Yeager, 64, the reasons are simple. “I still love the game and love working with young people, watching them develop and grow as young men,” he said. “I’ve seen so many of them take their places as productive citizens in the Fayetteville area, and (I’ve) become good friends with a lot of them.’’

Alongside him for 42 of those 50 years has been his wife, Chris Yeager, a veteran educator for Cumberland County Schools.

Chris said coaching football is what her husband was born to do. “He gets along with kids and relates to (them),’’ she said.

But it goes beyond that, extending to the relationship with his fellow coaches. Chris called it a fraternity, an in-the-trenches kind of mentality.

“They work all week and then they stand and everybody questions what they are doing on the sidelines,’’ she said. “You put your life in the hands of 16- and 17-year-old children. You make decisions and things happen and they have to support each other.

“Winning is a big deal, but the character of the young men is really what they are focused on.’’

Chris said she has to be committed to her husband and what he does because the demands of the job are extreme. Countless times she’s sat in the stands and heard fans yelling at her husband, questioning every decision he makes.

“It’s difficult to sit and listen to it when you know how much they put into it and how hard it is to hear that,’’ she said.

Chris has been behind her husband at the many stops he’s made in those 50 years. His winding route through local football has taken him to head coaching positions twice, at Terry Sanford and Gray’s Creek. He’s made stops as an assistant at Terry Sanford, South View, Pine Forest and UNC-Pembroke, returning to Terry Sanford in 2011, where he’s been ever since.

He’s now serving under Bruce McClelland, who was the quarterback for the Bulldogs in the mid-1980s when Yeager was an assistant coach for first Len Maness and then John Daskal.

McClelland said having a coach with Yeager’s experience and knowledge is invaluable.

“He’s seen it all,’’ McClelland said of the offensive and defensive alignments Yeager has used and coached against in his career. “I demand my staff to hold me accountable. I don’t want yes men.’’

Yeager is anything but that, McClelland said. “When he’s in the room, he’s going to speak up.”

One thing Yeager said hasn’t changed is the goal every week, to figure out a way to effectively move the football.

“It’s just like a chess match almost,’’ he said. “You move your pieces, and hopefully you move them in the right place to be successful.”

For the last several years, his job at practice and on Friday nights has been coaching the Bulldog receivers. That was the position he played at Reid Ross High School under John Daskal, starting at tight end and eventually moving to wide receiver when he completed his college education at Appalachian State.

He revels in seeing his players run routes correctly and work hard to get open. But he’s just as pleased when Terry Sanford runs an option or a sweep and one of his receivers makes a key block to spring a runner.

The one thing he still tries to sell his players on that dates back to his beginnings as a coach is the importance of work ethic, knowing the job you have to do. “Do your part to help the team, whatever that might be,” he said. “Special teams. Offense. Defense. Quarterback. Whatever it is.’’

Trey Edge was the quarterback at Terry Sanford in 1984-85. Yeager was his offensive coordinator and quarterback coach. These days, Edge watches Yeager from his perch in the press box as play-by-play announcer for the DK Sports Network’s weekly broadcasts of Terry Sanford football on WFNC 640 AM.

Edge said the thing that impresses him most about Yeager is he doesn’t have to be out there coaching at this stage in his life, but he does it because he can’t walk away from something he loves this much.

“He had a passion that was at times addicting and at times hilarious,” Edge said. “It’s all about helping

kids and teaching the game of football to kids.’’

When asked if he’s ready to give it up, Yeager said no. “Really and truly, I’ve never looked at football as a job,” he said. “It’s been something I wanted to do.’’And after 50 years, he’s still doing it.