Britt plays with purpose in run to volleyball titl 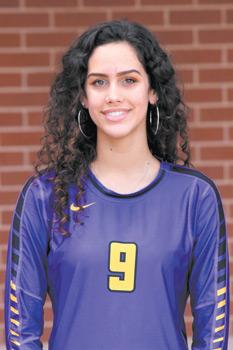 In her second year as a varsity volleyball coach at Jack Britt High School, Leigh Ann Weaver was supremely confident entering the 2018 season.

“I think our team is on an elite level physically, with all the natural athleticism on top of the volleyball experience in school or travel (volleyball),’’ she said. “I knew that we were 100 percent capable. Our biggest battle was on the mental side.’’

The Buccaneers overcame any misgivings Weaver had about the mental aspect. Last week, the Bucs traveled to Pinecrest and handed the Patriots their second conference defeat of the season, wrapping up at least a tie for the Sandhills Athletic Conference title and the league’s No. 1 berth in the state playoffs.

Through the Pinecrest match, with a couple of regular-season games to go, Britt stood 14-7 overall and 12-0 in the league. They’ll await the news on who their first-round opponent will be in the upcoming North Carolina High School Athletic Association 4-A playoffs.

At season’s start, Weaver decided to put the focus of this year’s team on her two power hitters, Lexy Cole and Kaiah Parker. “I told the girls what their roles are,’’ Weaver said. “Everyone has fallen into that perfectly, and identifying the roles straight away definitely helped.’’

As the team met various expectations during the season, Weaver and her coaching staff kept lifting the bar and setting new ones.

“The goal for a volleyball team is not to peak too early,’’ she said. “We definitely made sure to have the girls progress at an appropriate time within each part of the season.’’

As for her concerns about the mental aspect of the game, Weaver said it’s something she preached to the team from the beginning, along with playing with a purpose. “If they don’t play with a purpose, their heart isn’t fully into it,’’ Weaver said. “You’re poking around in the dark, for lack of a better term.

Cole, who leads Cumberland County Schools in kills with 199 through Oct. 10, has played a major role in Britt’s success.

“Lexy has stepped it up 110 percent,’’ Weaver said. “She has blown my expectations out of the water. She’s going to UNC-Asheville to play volleyball. That standard was set high for her, and she had a reputation of being a great volleyball player.’’

In addition to being a power hitter, Cole is a vocal leader on the court. That may be as important as her skill at spiking the ball.

“I feel like I’m very loud and energetic,’’ Cole said. “I keep the energy pretty high so everyone stays alive.’’

She tries to keep her chatter positive. “The only thing I want to be doing for my team is to make sure that everyone feels like they can do it,’’ she said. “If they mess up, I don’t want them to think they’ll keep messing up. They can just forget about it and no one is mad at them.

The whole Buccaneer team will need to do its best to have a chance of advancing deep in the state 4-A playoffs.

Cole feels the team needs to stay focused with the same end goal in mind. “We’ll have to speed up our game to match theirs,’’ she said of teams Britt might face in the postseason. “As long as we keep up with the speed, I feel we’re perfectly fine.’’