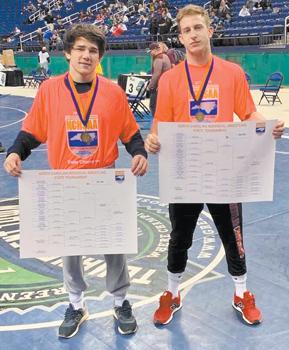 For Wilson, it was his second state title in as many seasons. He won the 138-pound class with a 12-0 major decision over Joshua Felix of North Henderson.

Heath Wilson, the father of Dallas and the coach of the Cape Fear wrestling team, had two main worries as his son pursued his second state title.

“Don’t let negativity seep in,’’ Coach Wilson said. “There are a lot of avenues that it could — everything from weight cutting to workouts.’’

Coach Wilson said his biggest concerns for his son were the pressure of repeating and the possibility of injury. An ankle injury just before the championship round last season almost derailed Dallas’ title bid.

Dallas said pressure took a toll on his mindset at times during the season, but the day of the finals, he had a couple of hours to gather his thoughts because his championship match was one of the last ones scheduled.

He thanked teammates like Barbour and another state finalist, Triston Chapman, who dueled with him in practice. He said there were also wrestlers from his club team who pushed him and boosted his confidence.

Dallas plans to take some time off but said he will definitely be back on the mat by March at the latest. “I’m trying to win a national title,’’ he said. “I’m trying to get up there with the top dogs.’’

After two years of missing out on the championship chase, Barbour made a decision that he was going to push for a state title in his final season at Cape Fear.

“I didn’t want to go into a tournament worried about a kid,’’ he said. “I wanted to walk in knowing I was tough enough and good enough to beat anybody.’’

He took weightlifting classes at Cape Fear and was pushed by Colt football coaches Jacob Thomas and Jordan Vann. He also got instruction in club wrestling from Kyle Narburgh. “He pushed me and taught me what I needed to do to be a state champ,’’ Barbour said.

He honed his mental edge as he pursued the rank of Eagle Scout in the Boy Scouts of America. “I would come off the mat straight to Boy Scout meetings,’’ he said. The two disciplines weren’t always fun, but he said he realized he had to drive through both.

Although his title match was close, Barbour never felt out of control. “I never felt I was losing,’’ Barbour said. “When he escaped and took me down, I knew what I had to do. I felt pretty confident.’’

Barbour hopes to wrestle in college but he’s made no definite plans. He leaves Cape Fear proud to be part of establishing a new wrestling legacy for the tradition rich Colt program.

“To be in the top three (as a team) the last two years ... means a lot,’’ he said. “Bringing in better coaching staff with Garrison Matthews and Kyle Narburgh the last two years, I think we are definitely moving up.’’

In addition to the state titles won by Wilson and Barbour, the following Cumberland County wrestlers placed in the top six in their weight classes in this year’s NCHSAA individual wrestling championships.

Photo: Dallas Wilson and Jared Barbour of Cape Fear High School pose with their championship brackets on the floor of the Greensboro Coliseum.