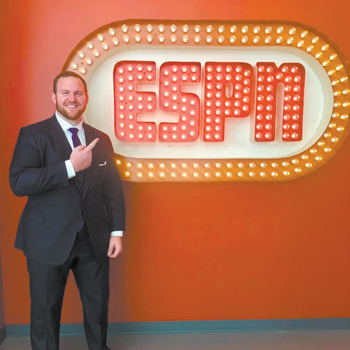 When former Jack Britt High School standout Eric Mac Lain became an All-ACC lineman at Clemson University, his major was health science and his plan was to follow in the footsteps of his parents in the medical field.

But from his Britt days to his years at Clemson, Mac Lain had frequent positive encounters with the media and was always a good interview. The stars aligned and the next thing Mac Lain knew, he was offered the chance to come to Bristol, Connecticut and interview for a job with ESPN’s new ACC Network.

On Aug. 23, he’ll make his first appearance on "The Huddle," a studio program that will air each week on the new network on Friday evening and Saturday morning previewing that week’s ACC football games.

“What a cool thing for a young man to be able to pursue with this great company on an awesome network with its launching and us being the ground zero,’’ Mac Lain said. “It’s just a great opportunity and I can’t wait for the launch.’’

It was during his time at Clemson that he began to realize a medical future might not be his best choice. “When I figured out how much school that took after the fact, I kind of changed my mind and got my master’s in athletic administration,’’ he said.
The offer from ESPN came at Clemson’s National Championship game with Alabama earlier this year in Santa Clara, California.

Mac Lain got a text from an ESPN representative who wanted to meet and talk with him. He initially blew it off as just another request for an interview to get his opinions on the game.

He had been sightseeing in California with his wife and her family, until the ESPN representative finally pinned Mac Lain down for a meeting hours before kickoff.

The talk at first was about the upcoming game, but then the representative offered to fly Mac Lain to ESPN’s Bristol headquarters to audition for a job with the new ACC Network.

“I wasn’t pursuing a different career at all,’’ Mac Lain said. “I just stumbled into it.’’
Other than being interviewed by reporters for print and television, he’d had no previous TV experience. He had done some work hosting a postgame radio show for Clemson football that provided game analysis and commentary on other ACC games.

“You never really know which interview did the trick or who threw my name in the hat where,’’ Mac Lain said. “I knew all along something like this could happen.’’

He said he shares that same message when he speaks with college or high school students or church groups. “You create your brand with social media and all the opportunities you’re going to get as an athlete,’’ he said. “It’s cool to be an actual story and an actual example of that.’’

The show Mac Lain will help host, "The Huddle," will be anchored by Jac Collinsworth. Collinsworth has been the regular host of ESPN’s NFL Live since early 2018.

“I love this team we have put together and the chemistry we already have,’’ Mac Lain said. “It seems like we have been working together for five or 10 years, but we just met a month ago so it’s really cool.’’

Mac Lain said the challenge for him in preparing for the show has been to expand his knowledge beyond his alma mater. “It’s an entire conference, not just one school,’’ he said. “I’m going to be faced with knowing the key players and the role players people may not be familiar with.’’

Mac Lain said his goal will be to avoid speaking in technical terms and draw a picture anybody can understand. He thinks the coaching and playing backgrounds of himself, Richt and Manuel will be an asset to the show.

“Just being able to dip inside of a player’s helmet or a coach’s headset, what was happening at this moment or what is this guy thinking,’’ Mac Lain said. “I think viewers will really appreciate that.’’

Mac Lain currently calls Charlotte home, but although ESPN has a studio there where it does production for shows on ESPNU and the SEC Network, Mac Lain will be flying to Bristol and the home office every weekend during the ACC season to do "The Huddle."

“We are very excited to get rolling,’’ he said. “It’s been a really cool thing to get to know these men and women throughout the network.’’

Eric Mac Lain points to the historic ESPN logo during his trip to Bristol, Connecticut for audition with ACC Network.