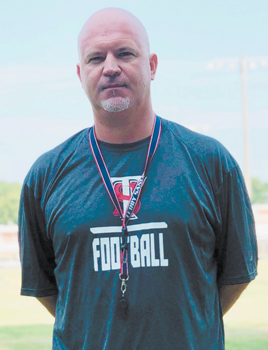 Forgive the Terry Sanford football team if it foregoes the nickname Bulldogs this season and opts for Road Warriors instead. They’re doing it with good reason.

Because the school’s aging football stadium was demolished earlier this year in preparation for construction of a new one for the 2020 season, Coach Bruce McClelland and his team won’t play a single game on their campus.

They will be moving to Reid Ross Classical High School’s John Daskal Stadium on Ramsey Street, which hasn’t hosted high school regular season games since Ross was closed as a traditional senior high school in the mid-1980s.

McClelland said the group he feels is making the biggest sacrifice are the seniors on this team and their parents. “They’ve spent so much time giving to the program, and it’s their senior year and it’s kind of like you’ve been displaced,’’ he said.

That’s where the Road Warrior mindset kicks in. “We’ve taken that Road Warrior mentality, tried to pump them up with that,’’ McClelland said.

This year, Terry Sanford was scheduled to play five home games and six on the road. They elected to flip the 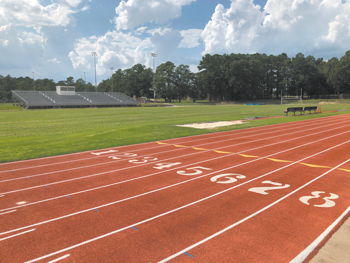 home-and-home arrangement with Jack Britt to allow as much time as possible to get the Reid Ross field up to date.

The Bulldogs won’t play their first varsity game at Ross until Sept. 20 when they host Cape Fear. They got in a trial run last week as they were scheduled to play a junior varsity game with Britt at Ross.

McClelland said the current plan is for the Terry Sanford staff to take care of lining and painting the Ross field for varsity games.

He’s also enlisted the help of baseball coach Sam Guy to make sure the surface of the field at Ross is in the best shape possible.

“Sam has been real instrumental in taking good care of the field over here,’’ he said. “His baseball field looks so good.’’

McClelland said Terry Sanford plans to treat each visit to Ross much like it would a road trip to neighboring E.E. Smith High School.

The players will eat a pre-game meal at Terry Sanford, dress and go through their walk-through on Friday before taking the short bus ride to Reid Ross.

The home stands will be the set of bleachers closest to Ramsey Street.

One good thing about Reid Ross is it has press boxes on both sides of the field, so the Bulldogs should have no trouble finding space for print and electronic media to have seats along with the crews from both schools that videotape the game.

There should actually be more on campus parking than at Terry Sanford. McClelland said the school hopes to make some money off that by selling season-long parking passes for $30, which will come down to $10 per each of the three home games that will be played at Reid Ross.

Terry Sanford’s final home game with Pine Forest will be at Fayetteville State’s Jeralds Stadium when the Bulldogs will celebrate Senior Night.

In addition to the parking in front of the school, there is a rear parking lot behind the visitors stands that can be accessed by a residential street at the end of the stadium furthest from the school itself.

Tickets will be sold on both sides of the stadium.

McClelland hopes Terry Sanford will be able to visit the stadium Thursdays and have a brief practice on the game field to get used to it.

The tentative plan is for the team to enter the field through a small group of trees outside the rear entrance to the gymnasium at the main school building.

The schools plans a major outreach to alumni and boosters in the next couple of weeks to
make sure everyone knows where to go and where to park.

“Safety of the kids is the most important thing to me,’’ McClelland said. “All the other stuff is luxury. My responsibility is to the parents and the kids and their safety.

Picture 2: A view of what will be the home bleachers when Terry Sanford plays its varsity and junior varsity football games at John Daskal Stadium at Reid Ross Classical High School this season