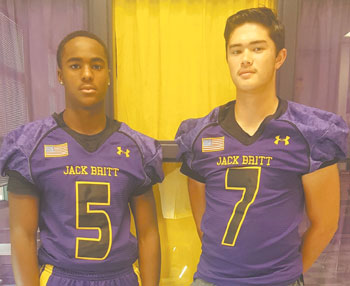 Throughout the preseason, Jack Britt head football coach Brian Randolph has preached a two-word motto to his team.

Restore order.
To Randolph, the message to players and coaches alike is for everyone associated with the Buccaneers to be on the same track and in the same frame of mind of being from Jack Britt, a place people respect and a team that other schools don’t want to face.
“They know when they play us, it’s going to be a tough match,’’ Randolph said. “It’s not going to be an easy game. It’s something you have to prepare for and work for in order to get a victory.’’
As the Buccaneers headed into their open date last week, they were sporting a 3-0 record, all three wins coming against the top three teams in last year’s Patriot Athletic Conference standings: champion Pine Forest and runners up South View and Terry Sanford.
Randolph said in all honesty, he didn’t see his team going 3-0, but he knew it was possible and he’s happy to be here.
One of the biggest reasons for the Buccaneers’ early success is the passing combination of quarterback Kevin Sentell and wide receiver Anthony Fiffie.
Through three games, Sentell leads the Cumberland County Schools with 564 passing yards and eight touchdowns. He’s completed 39 of 66 passes with only two interceptions.
Fiffie is the leading receiver with 15 receptions for 303 yards and five scores.
During a film session last week, Randolph told him Pittsburgh Steelers quarterback Ben Rothlisberger will be in the Pro Football Hall of Fame one day because of his ability to extend plays.
Randolph said Sentell has the same skill. “It’s really hard to guard someone for six or seven seconds,’’ Randolph said. “That’s what Kevin Does really well. He gets his feet separated, keeps his eyes down the field, just looking for that big play.’’
Randolph added that Sentell is smart and makes plays instead of mistakes.
For his part, Randolph said Fiffie is a great route-runner with excellent body control who seems to be able to slow things down when the ball is near him so he can focus on making the catch.
“He does a great job of embracing contact,’’ Randolph said. “He’s not the fastest guy in the world, but if you get close to him, he’s able to position his body in a way that if the ball is near him he’s going to catch it or make a good play on it.’’
Sentell said he and Fiffie have excellent chemistry and have been working together for five years.
“He runs great routes and gets open most of the time,’’ Sentell said. “It makes my job easy.’’
Fiffie said he’s playing with more confidence this year and has greater confidence in his teammates.
He credits much of his success with Sentell to the numerous offseason workouts they’ve had.
“We practice working on routes, catching the ball and getting our timing down,’’ Fiffie said. “I believe we caught people off guard, really turned their heads.’’
While Britt’s recent return to winning may be something new to the current players in the program, Randolph has vivid memories of getting off to fast starts during his days playing for Bob Paroli and Mike Paroli at Douglas Byrd High School.
That’s helped him take a measured look at what Britt’s 3-0 record means as he reflects on lessons learned from the Parolis.
“It’s one game at a time, one play at a time,’’ he said. “You think you’ve arrived somewhere and that’s when you set yourself up.’’
Bob Paroli had a favorite saying about that. He called it dropping your candy in the sand.
“We have our candy in our hand right now,’’ Randolph said, “but we could easily drop it in the sand and mess up everything we worked for so far.
“This off week we’re going to work on fundamentals and getting back to basics. Just focus on one play at a time.’’
Pictured from L-R: Anthony Fiffie, Kevin Sentell