Lack of experience no handicap for LeComte

Amber LeComte is finishing her first year coaching girls cross country at Terry Sanford High School, and she’s already given herself a higher bar to clear next season.

LeComte, who had no previous experience coaching the sport when she took over at her alma mater this season, guided the Bulldogs to victory in the Patriot Athletic Conference cross country meet and saw sophomore Rainger Pratt take home the individual championship.

A softball player during her days at Terry Sanford, LeComte said the biggest challenge she faced taking over cross country was learning how to train the team to succeed in competitive running.

She reached out to other coaches for advice and also got input from the runners on her team, including Pratt.

Pratt, a sophomore who has been running cross country since the age of seven, said the team was a little bit concerned about LeComte’s lack of coaching experience but felt she was open to working with them.
“We kind of taught her ways that made us better runners,’’ Pratt said. “We definitely worked together and meshed more as we got closer.’’

Although Terry Sanford did well in the regular season, winning all three in-season conference meets while also competing in a variety of invitationals, LeComte still wasn’t feeling terribly confident when it came time for the conference meet.

“I did not feel like the favorite,’’ she said. “South View has a very large team, a lot of people. The more people you have running in these meets, the more likely you are to get points based on performance.’’ 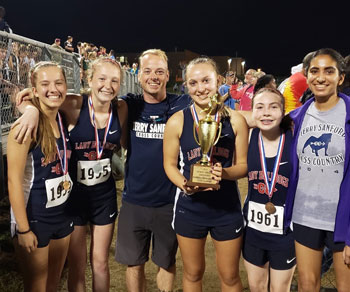 Terry Sanford only had six runners competing in the conference meet.

“We needed at least four or five of our girls to finish in the top 20 to get the points,’’ LeComte said.

Pratt won with a time of 20:21.90 to edge second-place Iris Terwilliger of Cape Fear.

Emma Morgan placed 10th for the Bulldogs with a time of 22:20.60. The Bulldogs then swept the final three spots in the top 20 with Brinlee Risenmay, Marissa Morris and Kaitlyn Wayne crossing the finish line in order at 18th, 19th and 20th.

The Bulldogs actually tied Pine Forest in team points with 65 each, but the Bulldogs got the championship when their sixth runner, Jasmin Singh, edged the next Pine Forest runner by less than seven seconds to clinch the victory.
LeComte knew Pratt was going to take the individual title when she saw the look on her face as the came around the track on the South View football field near the end of the race.

“I knew she was going to blow them out of the water,’’ LeComte said.

Pratt ran the South View course a lot during her freshman season with the Bulldogs and felt comfortable with it.

“There’s a woods part and some short downhills,’’ Pratt said. “I used that and the curves to my advantage.’’

Pratt qualified for the state meet last year and feels she’s got a good chance again this season. To get to the state meet, she had to place high enough in the regionals, which were held prior to the publication of this article on Saturday, Nov. 2, at Northwood High School near Pittsboro.

The state meet is on Saturday, Nov. 9, at Ivey M. Redmon Park in Kernersville.

“I usually run really well at regionals,’’ Pratt said. “As a team, I think we can do really well."