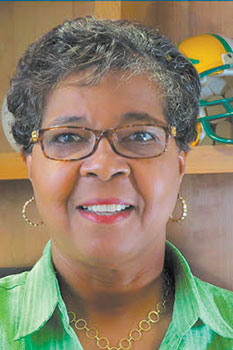 Barring any last-minute changes caused by the situation with COVID-19, the North Carolina High School Athletic Association has set a tentative date of June 15 for hopefully allowing its member schools to resume some kind of workouts in preparation for what it hopes will be a fall sports season.

But the look of those workouts and the look of the fall sports season are pictures that will both be dramatically altered and possibly out of focus based on the various plans that have been put forward for how teams can proceed.
On a video conference call with reporters statewide last month, NCHSAA commissioner Que Tucker announced the official extension of the current summer dead period to June 15, hoping that by then, the Phase Two plan of reopening the state of North Carolina would allow enough flexibility for teams to conduct some kind of practices.

“We will be very deliberate in our task, which is one reason we have not rushed,’’ Tucker said.

The main reason for taking it slow, Tucker said, was to carefully develop plans to make workouts safe as possible and allow coaches and athletic directors time to develop their own local plans of how to secure things like hand sanitizer and set up hand-washing stations.

“It will not be possible to prevent every student-athlete from contracting COVID-19,’’ Tucker said. “It’s our goal to do everything in our power to protect the health and safety of our student-athletes, our coaches and the communities represented by our schools.’’

For some sports, like football and wrestling, summer workouts will likely not allow any physical contact, making them more sessions devoted to conditioning than actual practice sessions.

Tucker said the current NCHSAA plan is not to hold any team back from practice once June 15 arrives, but to allow all of them some form of workouts within the guidelines set down by the North Carolina Department of Health and Human Services. The National Federation of State High School Associations has also issued a lengthy set of guidelines, but Tucker said the DHHS guidelines would take precedence.

The big question yet to be answered is will there be a fall sports season, especially football, which generates much of the revenue that is the life blood for the entire athletic program at many schools.

The other question yet to be answered is how many fans, if any, would be allowed to attend football games or other sporting events. That is a question Tucker is not ready to answer.

“To not have any fans in the stands would be rough,’’ she said. “We are not at the point yet where we are pulling up the tent on football this fall. We are hopeful we can have some fans.’’

Once the fall arrives, Tucker said the NCHSAA will look at any option possible to putting teams on the field, especially football. That could mean everything from a later than normal start to cutting the season short.

NCHSAA bylaws do not prohibit moving a sport to another season, but Tucker said that’s something that the NCHSAA would prefer not to do. “Moving sports season is a last resort,’’ she said. “It’s too early to talk about that. It’s very clear whatever we do will not be outside the parameters of the guidelines from the governor and DHHS.’’

For the moment, Tucker said the most important thing is that all agencies involved in deciding when and how high school sports will resume be consistent with what is put in place.

“It is important we are all singing from the same song sheet,’’ she said.