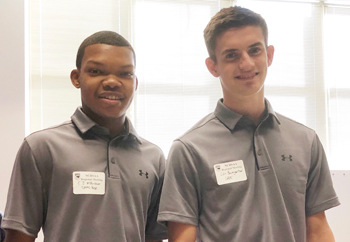 E.J. McArthur and Colin Baumgartner are both students and athletes at Jack Britt High School who have been directly impacted by the statewide shutdown of sports for all athletes at member schools of the North Carolina High School Athletic Association.

But McArthur, who plays basketball, and Baumgartner, a cross country, track and field and swimming competitor, have a little different perspective on the effect the COVID-19 pandemic is having on their peers. McArthur and Baumgartner are the Region IV representatives to the NCHSAA’s Student Advisory Athletic Committee.

The SAAC is made up of 16 athletes representing each of the eight geographical regions of the NCHSAA. In normal times, they travel to the NCHSAA office in Chapel Hill one Sunday each month to discuss topics of importance to the state’s high school athletes.

Though the pandemic has forced McArthur and Baumgartner and their fellow committee members to hold their meetings virtually over the last couple of months, they are still doing the business of the committee while also discussing the challenges of trying to reopen the state to practice and competitive sports by the time the fall season begins.
Barring a late change by the NCHSAA, many of the state’s school systems were scheduled to begin off-season summer workouts on July 6.

As a basketball player, McArthur was among the athletes who was able to complete play for the 2019-20 season, but he empathizes with those who weren’t as fortunate as he was.

“Most people were really devastated when their season ended,’’ he said.

Baumgartner said one of the biggest challenges of not being able to hold structured practices with teammates is developing the discipline to work out alone. “You’ve got to make the best of what you’ve got,’’ he said.

McArthur said many athletes he knows are speaking together daily to encourage each other. Some are holding small group workout sessions, either together or in some cases virtually.

His biggest concern remains that his peers make sure any workouts they are holding are being done with precautions against spreading the virus. “Some kids are just being kids while others are taking precautions,’’ McArthur said.

While no one is happy with not being able to practice or play, Baumgartner thinks most of the people he’s been in contact with are doing the best they can to observe the COVID-19 restrictions in hopes of returning to a more normal order of things as quickly as possible.

"I'm very understanding of what's going on," he said.

Looking to the fall and hoping for a return to normal competition, McArthur said he agrees with what most people in education have said about a return to athletics. If the students aren’t able to be in the school building on a daily basis, the consensus is that athletic competition shouldn’t be allowed either.

“If we aren’t safe enough to be around each other, what makes sports different?’’ McArthur said. “It’s risk and reward. If we risk it now and things happen, then everything is shut back down. Right now it’s the safety of the kids, coaches and officials.’’

McArthur noted the complicated nature of COVID-19 as a concern, adding
that even people who survive the disease are being diagnosed with various complications. “Kids should take precautions,’’ he said, “if not for themselves,
for their loved ones, the people in their house and everybody else.’’

There has been some discussion of moving some or all fall sports to the spring season, if needed, to allow the COVID-19 curve more time to flatten. Baumgartner sees some benefit in doing that, but added it could also create problems, especially for those athletes who play multiple sports and might have to choose between sports if their favorites were played at the same time.

Baumgartner doesn’t think it would be a good idea to allow some sports where it is easier to practice social distancing to resume while preventing other athletes in sports with greater contact from resuming practice and play.

“I feel that would create a lot of friction between contact and noncontact sports,’’ he said. “We could catch a lot of flak for promoting something like that.’’