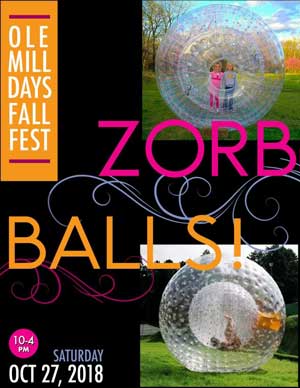 The addition of live music and a beer garden highlight the major changes for this year’s 19th annual observance of Ole Mill Days in Hope Mills.

The weekend event, scheduled for Saturday, Oct. 27, with a street dance kicking things off the day before, is the town’s annual celebration of its heritage as a mill village when textiles were king in North Carolina.

Kasey Ivey, who heads up senior programs for the Hope Mills Parks and Recreation Department, doesn’t think of this year’s Ole Mill Days as expanding. “More like a revision, I would say,’’ she said.

There will be food trucks, and some of the Trade Street businesses will be open to customers during the dance.

The beer garden and the live music are among the biggest new offerings the following day.

The town’s board of commissioners approved the sale and consumption of alcohol at Ole Mill Days, and a local business, Dirtbag Ales Brewery and Taproom, will be the vendor for the beer garden.

Ivey made it clear that access to the beer garden will be controlled and people who take part in it won’t be allowed to wander around other Ole Mill Days events with beer in their possession.

She said town officials are working on finalizing the map for the various activities, which will be taking place on the two ball fields at Hope Mills Municipal Park.

The addition of the beer garden and the live music is causing them to rethink where everything will be located.

For the beer garden, she said plans are being made to keep it totally separate from the various child-related activities that are offered on Ole Mill Days. She said the town has portable fencing and a physical barrier will be erected to contain patrons of the beer garden and keep them from milling around freely with the rest of the crowd.

Patrons who are of legal drinking age will be provided with a wristband to indicate they’ve been cleared to purchase alcohol.

The other new attraction, live music, will be the Cumberland County Line bluegrass band. They are scheduled to perform from 4-6 p.m. on Saturday, Oct. 27.

Ivey said the band was included in hopes of encouraging people to stay around longer at Ole Mill Days, or to get them to return later in the day and bring other people with them.

One of the new attractions for children is Zorb Balls. These are giant inflatable balls that people can actually get inside of and bounce off each other.

Things get started at 10 a.m. with an assortment of food vendors, craft vendors, some local businesses as well as appearances by various politicians running for office.

One event that will be missing from Ole Mill Days is the annual Chamber of Commerce Chili Cookoff, which has been moved to Nov. 10 and will be hosted by Dirtbag Ales.

The activities for children will also start at 10 a.m. and, in addition to the Zorb Balls, will include a variety of inflatable attractions like bounce houses.

At noon, Mayor Jackie Warner will give the official welcome, followed by the playing of the national anthem and an introduction of various local beauty queens named during the year. All of this will take place on Fields 1 and 2 at Municipal Park on Rockfish Road.

From noon until 4 p.m., the antique tractor pull, a staple of Ole Mill Days, will be held. Plans are also in the works to have a petting zoo and pony rides.

The extremely popular wing-eating contest sponsored by Zaxby’s is scheduled for 2 p.m.

Another popular event of the festival, the annual reunion of millworkers, had to be relocated this year because the recreation center is still closed due to damage from Hurricane Florence.

The millworkers will gather in the boardroom at Town Hall from 2-4 p.m. The reunion is coordinated by the Historical Commission of the town and sponsored by the parks and recreation department.

The day will close with a showing of the family-friendly movie “Hotel Transylvania” at 6:30 p.m. in the park.

Ivey said parking is first-come, first-served and people will need to be patient because there will be fall league ball games taking place on the fields adjacent to Fields 1 and 2 at Municipal Park.

If anyone has questions about Ole Mill Days, they can call 910-426-4109 or send messages through the Hope Mills Parks and Recreation Department Facebook page. If they need to meet someone face-to-face, the recreation department offices are temporarily located in Town Hall. Stop by the front desk there during normal business hours.