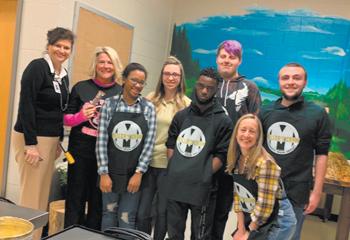 Looking for someplace in the Hope Mills area to grab a snack where the staff is committed to its work and they all have hearts of gold? Look no further than the newly-opened Creek General Store at Gray’s Creek High School.

The store is the latest project of Miller’s Crew, an organization founded by Terry Sanford High School soccer coach Karl Molnar and his wife, Kim.

By doing this in an educational setting, the hope is to give participants the chance to practice specific skills that will carry over into the workforce when they graduate high school.

Miller’s Crew already has stores, or labs as they prefer to call them, set up at Jack Britt, Pine Forest, Terry Sanford, Seventy-First and West Bladen High Schools. Another lab is near completion at Westover High School. Miller’s Crew has also been contacted by Union County Schools near Charlotte about doing labs there.

“I thought it was an amazing opportunity for our students, teachers and community,’’ Stewart said. “It’s something that will benefit our students and  let them learn some life skills.’’

Molnar said the lab at Gray’s Creek is one of the smaller ones in the Miller’s Crew program, which got its start in October of 2016.

Some labs, like the ones at Jack Britt and Pine Forest, are larger and include stations for stocking groceries. The one at Pine Forest has a bicycle assembly station.

“The whole point of these labs is to create as many jobs within that setting so the children can be trained and feel comfortable being trained,’’ Molnar said.

The lab at Gray’s Creek is under the leadership of occupational course of study teacher Ali Arostegui. Arostegui and her students surveyed the faculty at Gray’s Creek to see what items they’d like to be on sale at the Creek General Store.

The store can only sell pre-packaged food items, so the teachers opted for selections including coffee, pastries, muffins, granola bars and peanuts among other similar items.

“Ms. Arostegui has done a great job training the students,’’ Stewart said. “She’s been training them most of the first semester. We wanted to open the second semester.’’

The store is located in a converted teacher workroom at Gray’s Creek, on the first floor of the school building near the atrium.

The store can only be used by teachers because of restrictions placed on what kind of food can be sold to students during the school day. Typical store hours are from 8:45 a.m. until 11 a.m.

If teachers can’t leave their classroom to get to the store, the students running the store are allowed to make deliveries to a teacher’s room.

The startup stock for the store was provided by Miller’s Crew through grants that have been awarded to the organization. The goal is for the Creek General Store to become self sustaining and be able to use the profits it makes to restock the store.

“When that door opens and the kids are in Miller’s Crew Gray’s Creek aprons, they have the purest of grins and are happy to see you,’’ Stewart said. “If that doesn’t warm your heart, you must not have one.’’

There are about a dozen Gray’s Creek students currently working at the store, Stewart said. The goal is to add students from another class of special needs students later.

“They take pride in their jobs, and that’s most important.’’

There’s a sign painted on the wall of the store that says it all, Stewart said. “Opportunity. Community. Bear (as in Gray’s Creek Bears) essentials.’’

For any school interested in learning more about bringing a Miller’s Crew lab to their school, visit www.millerscrew.com.