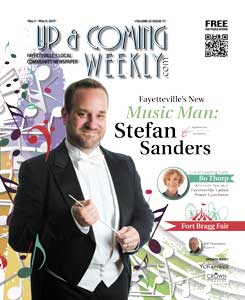 The man who said this has been in love with music since he was 3 years old and the Fayetteville Symphony Orchestra just revealed him to be its new music director and conductor. His name is Stefan Sanders.

Sanders said he remembers going to a concert when he was a teen and sitting very close to the stage. He said seeing the energy emanate from the conductor to the musicians onstage was “absolutely mesmerizing to watch. I knew right then and there ‘This is what I want to do with my life’ … it just took my breath away.’”

Today, as a successful conductor and thriving artist, Sanders said his approach stems from that same idea about emanation he initially fell in love with. “There’s a term in music called ‘pulse.’ And that is usually referred to as the time, rhythm or beat of the music. But I think … the pulse of music is more like the pulse of a living thing, a heartbeat. There’s this inner pulse that all living things have ... it’s a word used to describe the feeling (of something at its core).”

He believes a conductor’s number one job is to take the time to understand the pulse, or living heartbeat, of a piece of music, and to emanate that understanding to the musicians. His job is done, he said, when an orchestra can feel the music’s pulse without him so that for the performance he can simply be the facilitator.

And music isn’t the only thing that has a pulse. Cities do too, Sanders said – and he liked Fayetteville’s. Sanders spent a week in Fayetteville last November when he came as one of five auditioning guest conductors selected by an FSO search committee. “After a couple of days in Fayetteville, I knew that if they would offer me the position, I would heartily accept,” he said. “I was completely charmed by Fayetteville. One thing that surprised me was the amount of international representation … Every single person I met was an absolute delight. ... I know I’m going to a community of like-minded people and people that respect and treat one another with dignity and kindness.”

Sanders said he wants to build the identity of the orchestra within the community as an essential, vibrant point of human connection and help continue FSO’s upward trajectory of musical excellence. “When the Fayetteville Symphony Orchestra was putting together (the contract), they were very wise in stipulating they wanted a 12-week commitment. This is more weeks than there are actual performances ... They (wanted to ensure) they would have access and availability of their music director to make an impact on their community beyond just conducting concerts. That is one of the things I really relish for this for the coming season and our future,” he said.

Sanders said he wants to combat the idea that orchestras are “high-brow” or only enjoyable to certain types of people. “Good music was … written by a human being that had the same experiences and feelings about life that every other person has about life. It just so happens they were living and working in a time where this was their medium for expression,” he said. He said he wants to provide a context where everyone feels welcome to come to an FSO concert and where people are willing to sacrifice some of their time and resources to do so because they can see the value it will add to
their lives.

“(Art) is how we know for a fact … that we all share … this sense of community, whether it’s Fayetteville, North Carolina, the U.S., North America or the globe,” said Sanders. “We are not alone, and culture and art are how we express these feelings we all feel no matter where we’re from. This consumes my mind and my vision for what I do. I’m constantly thinking about how I can share this with as many people as I possibly can because that’s really what conducting is all about.”

The 2017-18 FSO season, led by Sanders, begins this October. Tickets will be available starting in May. Learn more about FSO’s values and mission at www.fayettevillesymphony.org.