Talking to Washing Machines and People: Caroline, or Change 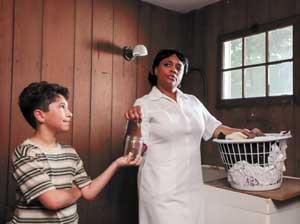 In the musical “Caroline, or Change,” opening at Cape Fear Regional Theatre this weekend, the washing machine, dryer, radio, moon and bus are all played by people.

“I think that immediately (establishes) that this is not realism,” said Director Bryan Conger. “This play is all about change. I think change begins in the imaginations of people. They imagine what is beyond them or what could be … and that’s how a movement starts.” He said the idea of imagination, memory and emotion being the catalyst for concrete change informed his approach to the whole show.

Joy Ducree Gregory, who plays Caroline, agreed. Gregory said it’s Caroline’s memories and feelings projected onto inanimate objects that allow her as an actress to portray someone who might otherwise seem one-dimensionally sad. “I don’t think she’s emotionally available enough to tell (other people) about herself, but she is emotionally available enough to have conversations with these inanimate objects, which all sort of represent a piece of her,” added Conger.

There are, however, other human characters in this story, like Caroline’s 8-year-old boy, her daughter who is coming into adulthood and the middle-class Jewish family she works for as a maid. Tension between Caroline and the Jewish family rises after a small amount of money goes missing. This serves as the impetus for the play’s exploration of the political through the personal, set in 1963 Louisiana.

Look forward to Jeanine Tesori’s visceral score played by a live orchestra that, according to CFRT’s mailer, blends blues, gospel and traditional Jewish melodies. In most musicals, spoken dialogue carries a good amount of the story with songs arriving at strategically emotional moments. Conger said this dynamic is reversed in “Caroline.” Gregory said she’s heard this score performed by other casts and she’s blown away by the talent in this production, saying Conger did a perfect job casting each role. “I don’t believe I’ve ever before been part of a show where every rehearsal I get chills just from listening to the music,” said Gregory. “This is the most challenging role, vocally, that I’ve ever (undertaken) … I’ve never had to dig so deep emotionally to sing a song.”

Gregory said the issues “Caroline” explores continue to resonate because they are still relevant in today’s America. “In this story, you have issues with race, issues with culture, with the disparities between those that have and those that don’t have — how those with privilege view the world and view money, versus those that don’t,” she said. “When you take that storyline and you look at where we are in 2017 … I think yes, we’ve come a long way, but … it’s clear that this is a time where we have to look at where we are. And the same conversations that will happen as a result of this play, those are the same conversations we need to be having in America.”

CFRT invites the public to attend free pre-show conversations May 17 and 18, from 6:30-7:15 p.m. On May 17, Nick Glazier, executive director of the North Carolina Justice Center, will facilitate a conversation about poverty and economic disparity in America. On May 18, Reverend Cureton Johnson will facilitate a talk about the civil rights movement. Pre-show conversations are made possible due to CFRT’s receiving the prestigious NEA “Art Works” Grant for “Caroline, or Change.”