Celebrating a Successful Season and Announcing a New One 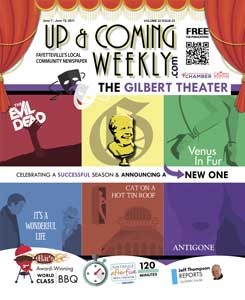 As the 2016/2017 season comes to an end, Gilbert Theater celebrates the best of this year at the 5th annual 2017 Pryer Awards on Friday, June 9 from 6-9 p.m. at the new Taste of West Africa building. Named for the Gilbert Theater Founder, Lynne Pryer, the awards are a way to celebrate the season and get feedback from the audience.

“The Pryer Awards is a way for us to honor the work that has taken place onstage in the previous season,” said Matthew Overturf, artistic director of the Gilbert Theater. “Audiences have the opportunity for each show to vote for their favorite actors, actresses, director, costume design and so forth.”

Overturf added that throughout the entire season the audience is asked to pick up a ballot in the lobby to vote for their favorites. The votes are tallied and the nominees are announced. Then, on the evening of June 9, the winners of each category are announced.

“This is our biggest fundraiser of the year,” said Overturf. “We will have door prizes, heavy hors d’oeuvres and drinks.” The event will feature good food, an open bar and a silent auction. There will be special entertainment from the students in the Gilbert’s educational Glee Program and the cast of “The Secret Garden.”

“The Secret Garden,” a musical, was a huge success. The show is about a young girl whose parents die of cholera in India. She is sent to live with her maternal uncle, Archibald Craven, who she has never met.

While there, she befriends a lot of the help in the house and discovers a garden that was the garden of her uncle’s late wife. The girl helps bring the garden back to life, and the spirits of her ancestors come in and out to help her.

“The show ends with this wonderful reconciliation and the family comes back together after this period of grief,” said Overturf.

The Pryer Award silent auction will feature items such as a men’s grooming package, a package from the Cape Fear Botanical Garden that includes a Pavilion rental, a Martini package that includes a bottle of vodka, a women’s beauty salon day package and more.

“Come out and join us for a fun night of entertainment, food, drinks and honoring the work that has taken place on our stage,” said Overturf.

Tickets cost $40. The Taste of West Africa is located at 107 Person Street. For more information or to purchase tickets, call (910) 678-7186 or visit www.gilberttheater.com.

A New Season at Gilbert Theater

Theater has the ability and the potential to change the world. For its upcoming season, Gilbert Theater introduces a lineup that will captivate and entertain the audience as well as provoke them to think.

“We are very excited about our upcoming 2017-2018 season,” said Overturf. “This is my first full season as artistic director, and I just started on February 1.” Overturf added that he is excited about being able to choose this season and he is a firm believer that a season should reflect the theater and the time.

“It is a very campy adult show and it is based on the film by Sam Raimi,” said Overturf. “It is a bloody, gory and raunchy kind of horror.”

The next show of the season is “It’s a Wonderful Life.” “This one is a very popular show based on the film of the same name,” said Overturf. “It is a wonderful show for the holiday season and people tend to come out in droves to see it.” Overturf added that he thinks that the show is becoming a Fayetteville staple. The show will run from Nov. 24 - Dec. 4 and Dec. 15-17. There is a student matinee on Nov. 27 and Dec. 4 at 10 a.m.

“Antigone” runs April 6–April 22. “This is a Greek classic by Sophocles that is about a woman who has to make a very difficult decision to follow her faith and what is right, or to follow the law, and how that dynamic affects her and her family overall,” said Overturf. “This show is very poignant for our time with the things that have been going on in the world.”

The final show of the season is “Cat on a Hot Tin Roof,” which begins June 1 and runs through June 10. “It is about a family coming back together for the patriarch’s birthday,” said Overturf. “There is some greed and one of the children, Brick, is struggling with what he wants his life to look like.”

Overturf added that Brick’s wife, Maggie, wants to have a child and they are supposed to be the heirs to the family fortune but because they don’t have children it is a bit in question. Brick’s brother is trying to hone in on the family fortune. Greed, secrets and family strife rise up in this classic Southern play.