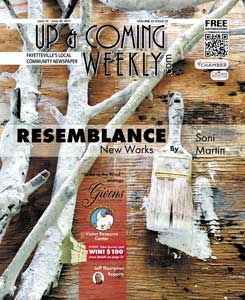 On June 23, The Ellington-White Community Development Corporation opens a new exhibit featuring one of Fayetteville’s most established artists. The “Resemblance: New Works by Soni Martin” exhibit opens with an artist talk and reception from 5-9 p.m.

With a comprehensive body of work to her name, Martin could have brought in a sampling of her works that she’s created over the years, but she didn’t. “Instead of a retrospective, where I would fill the gallery with past works, I set a personal goal of creating new work for the exhibit,” said Martin. “From setting that goal, many unexpected challenges occurred.”

Martin said she decided to undertake a new body of work for several reasons. “For me, my approach to two-dimensional works had become predictable since I had been predominately working in the encaustic medium for the last eight years. It has been become somewhat like a formula that I knew well. I wanted to investigate new materials and methods to express ideas I was becoming preoccupied with,” Martin said.

She added that “There was a disconnect between sculpture and two-dimensional imaging-making that I have wanted to resolve for a long time. For me as an artist, there is always a new kind of synthesis that is taking place in my response to culture and materials that I would like to investigate and express.”

Once she started the process, Martin found the journey to be as unpredictable and delightful as the outcome, but challenging as well. “Little did I know when I started how convoluted the process would become during this past year and what I would come to understand about myself as an artist, ways of working, and obstacles to the creative process. Little did I know how each of my reasons were complicated, each in their own way,” she said.

Her biggest challenge was that she was going in too many directions at once. In the beginning of this process, Martin spent time researching new materials she thought would be perfect for the direction she wanted to go with her work.

Then she set about getting to know these new materials, only to find out much was not even applicable. “I had the problem of going in too many directions — I simply had too many ideas I wanted to try and most of those were a disaster. So, there came a time when I realized I had to put limitations on myself and make concrete decisions about the direction of the work,” said Martin. “I knew I wanted to continue to mix abstraction with representationalism. Color is important to me, so I made the decision to focus on practicing a more luminous color palette instead of strong contrast and pure hue. This in itself involved research and practice making color swatches. I have always preferred to integrate the still life and the landscape into my work, but I also wanted to focus on how I could explore nature in a way that it be similar to a metaphoric still life.”

Yet another influence on Martin’s work is her fascination with the idea of obscurity as content. “This one focus had the most impact on the new work in ways that feel I was able to bridge sculpture and two-dimensional works for this exhibit,” she said. “In the final analysis, the exhibit will open and what I will have come to understand is that it’s really the beginning. For an artist, it doesn’t get any better than that.”

The exhibit runs through Aug. 5 at the Ellington-White Gallery, 113 Gillespie Street. Find out more at www.ellington-white.com.