‘In the Between: New Work by Kaela Nommay’ 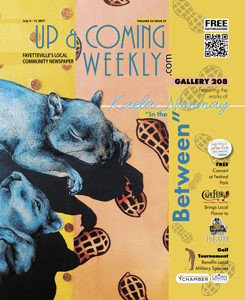 Anyone interested in a fresh and highly creative approach to image-making and ceramics should plan on attending the opening of a new exhibit at Gallery 208. “In the Between: New Work by Kaela Nommay” opens with a public reception at 208 Rowan Street, from 5:30-7 p.m. Tuesday, July 11.

Gallery 208 is very pleased to introduce such a fresh and gifted artist to the community at large with her first one-person exhibition in the region. Nommay brings the contemporary sensibilities of a postmodern pop culture artist to Fayetteville and the area. The artist employs her exquisitely detailed drawing ability as a way to bring the viewer in closer to look at her work. After taking the time to look closely, the viewer may be perplexed. It’s as if the work alludes to something we should remember but have forgotten, or maybe something we missed and should pay attention to?

Having flawless design skills, Nommay juxtaposes large areas of negative space and sometimes patterns with details of the recognizable in nature. If her work is anything, it is idiosyncratic, and the viewer senses from the images and forms a bigger dialogue is taking place — the whimsical is foreboding, something seemingly romantic is perhaps a metaphor or evidence of a state of being. Inherent value in the work is that it is not decorative but visually calls to be examined.

After looking at Nommay’s work, I was interested to know if my sense of the content was at least close to the artist’s intent. The artist affirmed parts of my interpretation when she explained what inspires her and her approach to the work.

“When creating these works, I was thinking of the relationship between human-constructed space and nature and how both sides are affected — the ongoing push and pull for defining whose space is where,” Nommay said. “As an answer, I ended up with an ambiguous gray space as the starting point to explore in this new body of work. Often, I reverse the roles of animals and humans to lighten the mood and create an absurd and humorous experience of the animal’s displacement.

“The scenarios in the work are recreated from my everyday observations and experiences. Whether it be from a phone call with my mother, catching a snippet of a conversation or a funny scene I see idly walking by strangers — all of these small moments stick with me. Mundane moments are what I believe can make life interesting. It separates each day from the next, but these small moments are constantly in flux, much like defining our space apart from nature with roads and structures as we are constantly restoring areas and adding new ones.”

Although her style is highly graphic, drawing and painting is one way in which Nommay distinguishes herself from a reproduced or scanned image. The use of patterns has also been used by the artist in older work and continues in the new work. When asked about her design practice and why she often uses patterns, she explained, “The patterns found in my work are common to home interiors such as wallpapers, fabrics and pillows. Integrating patterns that are commonly found in the home suggests the presence and influence of the human figure. On a formal level, this flat space contrasts and balances the more rendered areas and forms. It also leads the viewer’s eye throughout the artwork, directing it to other significant areas of the composition.”

The Fayetteville community and region is fortunate to have an artist of Nommay’s caliber as a local artist, educator and resource for innovative work and thinking. Nommay moved to Fayetteville from San Antonio, Texas, a year ago. She earned an MFA in Ceramics from the University of Texas at San Antonio in May 2016, and a BFA from the University of the Incarnate Word in 2013, also in San Antonio, with a double concentration in ceramics and painting.

Since Texas is a different landscape from North Carolina, the artist was asked if living in our region has affected her work. “Since I primarily recreate observations from everyday life, I have had a new influx of inspiration since moving to North Carolina,” she said. “Having trees all around, a river a few feet from my balcony at home and experiencing the changing seasons has given me a new source to observe the relationship between human space and nature.”

Nommay has already been formally influencing the area’s art students since arriving in Fayetteville. During this past academic year, she has been busy working as adjunct faculty for all three of the local institutions of higher learning: Fayetteville State University, Methodist University and Fayetteville Technical Community College. She has plans to continue teaching in the area and exhibit her work as much as possible in the region and nationally.

The public is invited to the opening reception at Gallery 208 to meet the artist and have a preview of “In the Between: New Work by Kaela Nommay” July 11 from 5:30–7 p.m. The exhibit will remain up until Sept. 10, 2017. If you are not able to get to the opening reception, Gallery 208 is open during regular business hours: 9 a.m. – 5 p.m. Monday through Friday. For questions about the exhibit or location of Gallery 208, call Up & Coming Weekly at (910) 4846200 or go to www.upandcomingweekly.com.