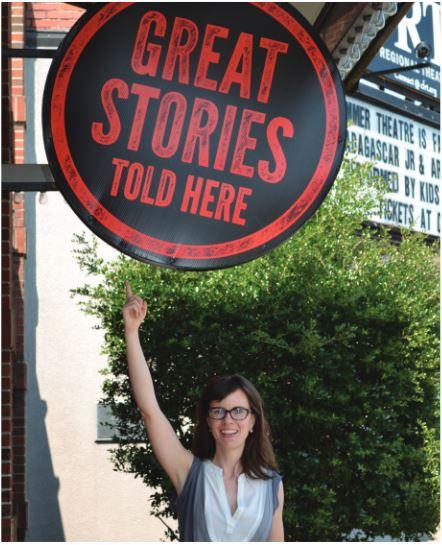 Burke moved to Fayetteville from her home in New York City to take the position and officially started July 1. She is originally from Connecticut and graduated from Southern Methodist University in Dallas with a BFA in theater studies (concentration in directing). She brings almost 20 years of experience as a director, dramaturge, assistant director and artistic director to her new position with CFRT.

Burke said she spent a lot of time looking at CFRT’s programming when she applied for the job. “That was probably the biggest draw for me,” she said. “There’s this theater that programs things like ‘Caroline, or Change’ … and the next season they’re doing ‘Disgraced.’ It felt like it was being produced in a very smart way. ... The voice that the community responds to in the arts is … bold and adventuresome, and I found it really appealing.”

The other draw, Burke said, was the warmth she felt from the Fayetteville community. She said the reception and support she received in Fayetteville was different from the sometimes “sharp-elbowed” fight for people in the arts to be acknowledged in NYC.

“It’s been one of the most welcoming experiences of any theater that I’ve led,” she said. One CFRT board member made a particularly striking impression on Burke. Of the board member, who preferred to remain unnamed, Burke said: “She’s the most generous human being I ever have met. I even mentioned one time that I liked her iron, and she sent me a discount that Macy’s was running on the iron. You just don’t see that level of consideration of other people … it’s very distinctive, and I’m excited to be a part of that.

“Everyone is really motivated to make the transition a success, and also, everybody knows about the theater. That’s a huge (benefit) for an artistic leader coming in.”

Burke’s journey with theater began as a young performer onstage. “My older sister was in a production of ‘The Music Man,’ and they needed some little kids to run around the stage, so I was one of those little kids,” she said. She became involved with theater more seriously in high school.

At a certain point she realized that, while she enjoyed acting, she was more excited by a different aspect of theater. “I really liked understanding why people did what they did,” Burke said. “To me, that was more interesting than having eyes on me.”

She started focusing on directing, and in her senior year of high school, Burke directed her first full-length show. “We ended up doing an original children’s musical about recycling that toured all the elementary schools that (my theater teacher) let me direct,”  Burke said.

A love for children’s theater stuck with her. As the producing artistic director for Millbrooke Playhouse in Pennsylvania from 2009-11, Burke commissioned two new musicals for children. One of them outsold its box office goals by 700 percent and transferred to NYC. A few years ago, Burke led the effort to create autism-friendly performances for the children’s series as the director of programming for the New York Musical Theatre Festival, the largest musical theater festival in the United States.

She plans to carry this passion into her position as CFRT’s artistic director. She said she wants to make sure children’s theater thrives. “I think theater can teach a lot of things that are helpful life skills for children, including ... how to work backward and accomplish a goal and how to work with other people,” she said. “And I think the connectivity of theater in what is an increasingly technological world has a value that you can’t place a price tag on.” She added that CFRT already has a long, prized history of children’s theater programming. “I’m going to continue to build off of that,” she said.

She said a focal point in her interview process with CFRT was the relationship between the arts and the military. Burke wants to make theater more accessible to the Fort Bragg community. Her goal, she said, is to use children’s theater as a means of easing the transition for military families. “It can be something that helps people feel like a part of the community even if they’re shifting communities frequently,” she said.

Burke also wants to focus on “homegrown stories. Stories that are about …the South and about the regions theaters are in, I think, is an important part of what a cultural institution does for a community. I’m excited to jump into this in the following season,” she said.

The Role of Local Theater in Fayetteville’s Growth

Burke believes a good local theater exists in supportive relationships with the institutions around it and invites people from outside the community to enjoy its unique offerings. These ideas, she said, are catalysts for growth.

Burke is brainstorming strategic decisions with her growth goals in mind. “We’ve shifted one of our ‘Dreamgirls’ performances to a Wednesday matinee to see if we can start to build some bus tourism in the area,” she said. She said bus tourism is a great opportunity for institutions in Fayetteville to build more symbiotic relationships and foster an awareness of each other to tourists. “You can make your marketing dollars go further because you’re putting a visit to the museum with a visit to the theater with a meal, and that’s a day trip,” she said. “Because all of the infrastructure already exists in Fayetteville, it’s primed to now move into the execution phase of a marketing strategy around that.

“One of the things I have witnessed as somebody who is new to the community is how much there is to do here.” Burke cited the city’s many museums, the Fayetteville Symphony Orchestra and the Cape Fear Botanical Garden as a few examples. “The theater itself is a real asset to the culture of the community, and so I want to continue to build off the incredible work that has already been done,” she said.

Burke said she’s impressed that business people in Fayetteville are very aware of and invested in the value of the arts and culture. “When I sat down with some of the key stakeholders of the theater, who aren’t board members but are business people, I was so impressed with how they’re thinking about the arts in tandem with commerce as an economic engine. It’s a really exciting place to be at this moment in the city’s trajectory.

“It really does feel like a community that’s primed to ... jump into its next moment in terms of  self-identity.”

The theater’s upcoming season is a “Season of Discovery.” Its first show, “Dreamgirls,” opens this September, followed by a unique combination of laughter-inducing and conversation-starting shows, from “Seussical” to “Disgraced.”

“I think the best theater really reminds people to take advantage of the time we have,” Burke said. “I love that a whole bunch of strangers can come together and share an experience … whatever their differences and backgrounds may be. … it creates a kinder world.”