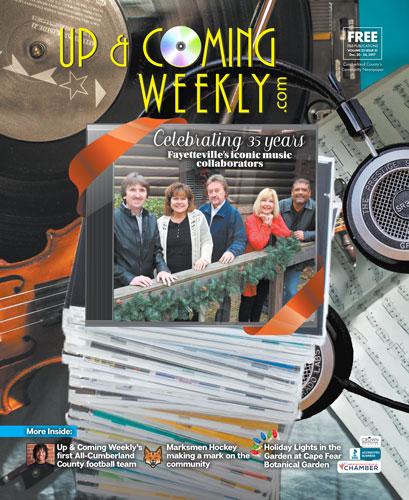 It can be easy for young artists in Fayetteville to miss out on the pool of talented peers and potential for collaboration surrounding them. Doyle Wood and Lynne O’Quinn’s 35-year history of collaboration with each other and with other local musicians demonstrates just how valuable it can be to look up and look around while pursuing your craft. The making of their most recent release, the single “Christmas Eve with You,” reflects a process that’s been made possible through years of relationshipbuilding and hard work.

Wood is a producer, vocalist and guitarist. O’Quinn is a lyricist, internationally successful author and founder of His Outreach Worldwide. They met in the early ’80s when both of their sons were enrolled in Village Baptist Daycare. At that time, O’Quinn was working as a manager for Lynyrd Skynyrd. Wood had just opened a private recording studio, Daxwood Productions, and was in and out of Nashville working with the likes of Paul Worley, Lady Antebellum’s producer. Wood and O’Quinn quickly learned of each other’s similar passion for music and complementary talents and, in O’Quinn’s words, “were stuck with each other ever since.”

Fast-forward to the present and the pair have hundreds of collaborative songs under their belts – the most recent of which was completed just this month. “Christmas Eve with You” was born last August when the lyrics came to O’Quinn as she sat on her back porch.

“The words, I don’t know where they come from, they just come,” she said. Among those words were the chorus, which reflect the longing of military service members separated from loved ones during the holidays: “I’ll think of your sweet kisses and the way you make me feel/And no one can convince me that Santa isn’t real/He gave me all I wanted – it’s amazing how he knew/All I ever wanted was Christmas Eve with you.”

“I wrote it probably in 8 minutes,” O’Quinn said. “I sent it to Doyle, and he immediately liked it, and he said, ‘We’ll record this.’”

In the Daxwood Productions studio, Wood worked out the basic melody on his guitar and sang a draft of the vocals. He then called upon a string of other local musicians he’s been working with for years. He first asked Richard Gates and Carl Greeson – who have played keys and drums, respectively, for BJ Thomas – to come to the studio and add their groove to the track. Wood then sent the working file to Milton Smith – who played piano at Elvis Presley’s funeral – to do the orchestration and play the grand piano. Guillermo “Bill” Ayerbe, retired Fayetteville Symphony Orchestra concertmaster, played violin for the song. Laura Stevens, creator of The Heart of Christmas Show, sang backup vocals. Last of all, Wood sang the final version of his vocals and finished mastering the track.

Wood met these other musicians through a mutual love of music, just as he did with O’Quinn. Stevens sang in the first TV commercial for Daxwood Productions in the ’80s. Today, “She’s our go-to vocalist for just about anything,” Wood said. “She sings all the parts. She is the choir.”

they both majored in music at the University of North Carolina at Pembroke in the ’70s. They also both taught music in the Cumberland County Schools system for 5 years after they graduated. Smith is now Wood’s orchestration man. He listens to the first draft, or “scratch track,” and helps build the song out. Wood connected with violinist Ayerbe, keyboardist Gates and drummer Greeson when, as he was building momentum for his studio in the ’80s, he “tried to get a collective base of really good players.”

“Christmas Eve with You” will be played at the Christmas party for the North Carolina civilian aide to the secretary of the Army and will air on all local networks. The song will also play on Pat Gwinn’s nationally syndicated radio show and is available for streaming via MoonDog Radio’s free app. Other collaborative songs from this team have won international acclaim, such as a Best of Soul award in the UK for “Loving You is the Best Thing.” Another song that honors the military, “Stand Proud,” has been played at events held at The Pentagon. Search “Doyle Wood” on CdBaby, iTunes or Amazon to view his full discography.

“We’re just very blessed; without all these artists, we wouldn’t have these songs,” O’Quinn said.

Four of them have been inducted into the Fayetteville Music Hall of Fame in recognition of the musical distinction they’ve brought to the community: Wood (2016), O’Quinn (2016), Stevens (2015) and Smith (2010).