CFRT’s ‘Disgraced’ a must see 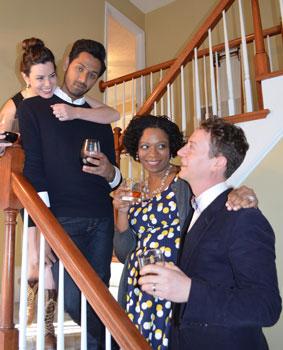 Bravo to Cape Fear Regional Theatre for putting together such an experience for local audiences. The story is thought-provoking, the new seating arrangement is engaging, the direction is commendable, and the cast is one of the best I’ve seen.

The story is heavy, to be sure. Talking about politics, religion and racism might turn some theater-goers off. But don’t miss this opportunity to see CFRT doing what it does best – honoring art with a quality production, even if it might make some viewers a bit uncomfortable.

Ayad Akhtar’s Pulitzer Prize winning play “Disgraced” is full of the kind of drama that will keep you glued to your seat. For some, I suspect, it is shocking. For others, it might hit a little close to home and encourage us to reflect on how we treat or engage with those who are different from ourselves, those who fall into another category – white, black, Jewish, Muslim.

What I enjoyed so much about the story itself is that each category is equally misunderstood and abused. Because that is how it is in real life. No one, no matter what your label, escapes the pre-conceived notions of others.

The overarching theme of the play deals with how the topic of radical Islam affects public discourse on our differences in race and creed. But the real gem is to see how that discourse can affect individuals.

Director Dani Keil accomplishes this by bringing together an amazing cast and crew. Keil’s focus is on honoring the story itself. There are no flashy costumes. The set and props are minimal. The lighting and music skillfully mimic the emotions of the characters.

The new seating configuration, developed for this production, seats the audience on three sides of the stage. This intimate arrangement draws the audience into the lives of the characters.

The character of Amir, played by Raji Ahsan, is a lawyer working for a Jewish firm in New York. When his nephew, Abe, played by Darius Shafa, gets him involved with an Islamic imam accused of terrorism, his life starts to unravel. Amir’s wife, Emily (Lauren Mae Shafer), is an artist whose work is based on Islamic imagery. Isaac (Seth Shelden) is a Jewish curator helping Emily. Isaac’s wife, Jory (Alason Little), an African-American woman, is a colleague at Amir’s firm.

Over dinner, the two couples exchange thoughts on careers, faith and politics. Secrets are revealed that leave some lives in shambles. We see how even well-meaning people have preconceived ideas of others. We also see that some struggle with their own self-identity.

It is a lot to consume in 90 minutes.

The cast superbly carries this weighty story from start to finish. They each bring much passion and energy to their beautifully complicated roles.

They are all, at one point or another in the play, disgraceful representatives of the human race. And that is what makes them so interesting. They are lying, cheating, duplicitous, abusive – and that’s before we even get to politics and religion.

Amir tries to leave his culture behind to chase the American dream. But we see that by never reconciling with it, he becomes consumed with self-loathing. Ahsan does a remarkable job gliding back and forth between his character’s self-identified apostate views of Islam and what others view as inexplicable pride in what has been done in the name of Islam.

In the showing I attended, the audience collectively gasped at two points in the play – once at the use of the N-word and once when Ahsan’s character expresses a kind of pride for the attacks on 9/11. I felt both were beautiful moments in storytelling as they expressed the connection between the audience, the story and the actors. It seems to me the point of the play – that we sometimes let words affect us so much that we often refuse to engage in dialogue to discover the meaning behind those words or ideas.

“Disgraced” runs through March 25 with limited seating based on the new stage configuration. The play is rated R due to its language and violence. There are discounts for military, seniors and students. For tickets or more information on special events, contact CFRT at 910-323-4233 or visit www.cfrt.org.