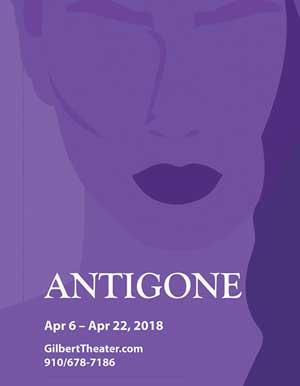 (Super)heroes traipse across our blockbuster movie screens from the pages of dog-eared comic books. Fools frequent innumerable reality televisions shows on air. And in real-life politics, cowards and tyrants run the same beaten path. These archetypes – the fool, the hero, the tyrant – work precisely because their universality can play toward any place or time or idea. These archetypes are also the baseline of Sophocles’ play “Antigone.” The Gilbert Theater’s recent production of the play invites us here: into the gates of ancient Greece, where the gods, prophecies and civilization are all as one. Yet the play excels best as an emotional testament to how any society responds to civil disobedience.

The play begins with Antigone (Ashanti Rodriguez) and her sister Ismene (Helen Steffan). Furious that her deceased brother has been denied burial rites by her uncle, King Creon (Michael Carney), Antigone begs Ismene to help her bury the body in secret. Ismene refuses and asks, “What can a girl like me do against a king?”

It’s moments like these throughout the play that forge a more nuanced response to the idea of civil disobedience. Ismene is a prime example of how the prospect of dying can be an absolute motivator for cowardice or inaction. It’s just as true 2,000 years ago as it was in, say, 1940s Germany, and even today.

For some, inaction would mean the same as death itself. It would mean paving the way for misguided complacency and tyranny. This is so for Antigone, who decides to bury her brother anyway and fully accept her fate as a “traitor” against the king’s will.

Rodriguez gives a shockingly level- headed performance as Antigone for one so young. (She graduated from Hoke County High School just last year and is now a freshman at UNCP). Her voice rings out with clarity and confidence, demanding each audience member to listen to their own conscience. As part of the chorus, she also has a tremendously beautiful singing voice.

Another electrifying life force in the play was the relationship between King Creon and his son Haemon (Justin Matthew Toyer). Haemon attempts to sway his father to not sentence his fiancée Antigone to death. But Creon believes controlling dissension is as necessary to rule as creating peace. By the last act, their tension on stage is so emotionally explosive that you become unsure whether to lean forward or cringe away. It’s one of the best dynamics I’ve seen on a Fayetteville stage.

The side characters, as well as the original music by Kara Arena, should be credited with not leaving a single down moment to waste. They created the entirety of the play’s ethereal mood. In fact, one scene with the prophet Tiresias (Larry Carlisle) and his assistant (Linda Flynn) had us psychedelically transported to a different realm – in a scene that only lasted five minutes.

The play is like a 1,000-watt flood light transfixed on the imbalances of power. As a result, it’s impossible not to view our own moment in time within the confines of “Antigone.” I thought of the Black Lives Matter movement when I heard, “A brave corpse answers for all crimes.” And the #MeToo campaign when Antigone said, “We’re not victims. We’re enemies of the state.” I thought of the president when I heard, “Power turns vulgar when it knows it has lost.”

“Antigone” is a raw and intense looking glass that engages the audience with a very intimate staging experience and potent sense of vive la résistance. Borrowing from Martin Luther King, Jr., Antigone reminds us that “the arc of the moral universe is long, but it bends toward justice.”

The show runs every Friday through Sunday until April 22. For tickets, go to www.gilberttheater. com.