In review: Sweet Tea Shakespeare’s ‘The Tempest’ and ‘Pericles’ 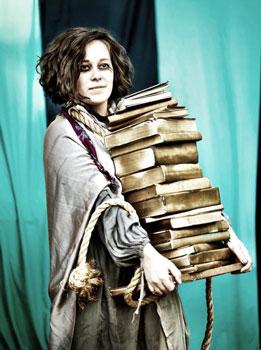 Over the years, Sweet Tea Shakespeare’s outdoor performances have become a summer staple in Fayetteville. This summer is no different as the company is in the middle of a two-week repertory run of two classic Shakespearean works: “The Tempest” and “Pericles.” June 6 saw the proverbial curtain rise on “The Tempest,” the story of Prospero – the rightful Duke of Milan who has learned magical powers from years of intense study – and his daughter, Miranda, who have been stranded on a mysterious island for 12 years. The island is also home to Ariel, a spirit enslaved by Prospero, and Caliban, a native inhabitant of the island who has also been enslaved by Prospero. As Duke of Milan, Prospero was overthrown by his brother Antonio.

Antonio, along with King Alonso of Naples and a slew of other characters, are shipwrecked on the island due to a storm created by Prospero. Once Prospero has all of his enemies together, he sets about separating them from one another in order to exact his revenge and regain his position as Duke of Milan.

STS often uses a technique called cross-gender casting, which means that men are often used in the roles of women and vice versa. “The Tempest” sees this practice employed to great effect as most of the main male characters are played by incredibly talented women – including the lead role of Prospero, which is helmed here by the impressive Duana Burby.

Additionally, Tohry Petty’s portrayal of Ariel, the magical spirit, is infectious. She brings a physical and dramatic energy with her any time she steps onstage. The issue here, of course, is that the cast is much too large to mention everyone, especially when there are so many standout performances.

With “The Tempest,” STS’ creativity and ambition are on full display. From the opening moments, the audience is transported into the world of magic that the piece presents. The opening scene’s shipwreck is imaginative and spellbinding. The production’s color palette and costume design are both striking and complimentary to the action unfolding. “The Tempest,” like all STS
shows, is presented in an arena format with the audience able to choose their own seats anywhere on three sides around the performance space, which makes potential second viewings a completely new experience.

For more information or to order tickets, visit www.sweetteashakespeare.com. STS can also be reached via phone at 910-420-4383. 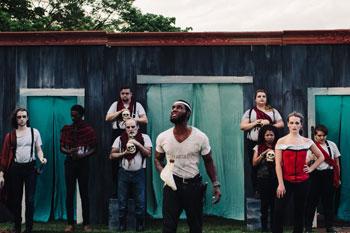 “Pericles” was written by William Shakespeare and possibly one other collaborator in the early 1600s. It tells a fastpaced story of the Prince of Tyre’s adventures throughout ancient Greece, hitting many emotional notes along the way. Fear, passion, loyalty, loss, love – it’s all there, along with a healthy dose of comedy. STS’ quirky approach to theater shines in its production of this story, which runs through June 21.

A hallmark of STS is its musicality. The term speaks to the live music woven throughout its shows, but “musical” is also a good descriptor for the way STS uses basic elements to invite the audience’s imagination out to play. “Pericles” showcases smart decisions by Director Jeremy Fiebig that maximize this invitation. Water and its doings – storms, waves, near-drownings – are a big part of Pericles’ story. In one scene, Pericles’ ship wrecks, and he is cast into the sea. We watch actor Richard Adlam’s form rise and fall and gasp and reach as company members swirl swaths of blue fabrics around him. One member holds a long, thin pole with dangling paper-cut fish above Adlam’s head. Another cast member paces around the grounds with a giant, round instrument that sounds like it’s filled with rice or beads.

STS’ form lets you see exactly how the magic of scenes is created, but this doesn’t detract from the effect. If anything, audience members are invited to suspend disbelief like they really mean it – to lean into their role as a necessary component to creating the wonder of the production. Compared to more traditional theater, it’s both a more demanding and yet more childlike charge that yields great reward.

The other elements of the show strike a nice balance between guiding the audience and leaving some things to simple, felt emotion. As in every STS show, a program provided at the beginning includes a brief, bullet-point synopsis of what happens in the play. These bullet points are a smart move, as Shakespeare can get pretty convoluted. For this show, each cast member also wears variations of a grey T-shirt with their character’s name written on it in clear, elegant type. In a story with names like Thaisa, Helicanus, Dionyza and Thaliard woven among Shakespeare’s intricate dialogue, these shirts are funny in their frankness and effective in their utility.

The makeup is equally simple yet effective, the most notable being large silver tears that make permanent residence on Pericles’ cheeks. When he’s happy, they sparkle with joy; when he’s sad, they accentuate the grief in his eyes. In between, they give him an intense, otherwordly look. It works.

This production also does an excellent job showcasing the beauty of Shakespeare’s wordsmithing. There’s a reason he’s considered one of the greatest writers of the English language, and it’s a delight to hear his lines in the fantastical, silly and heartfelt world STS creates.

Adlam, last seen as Mr. Rochester in STS’ production of “Jane Eyre,” plays a solid Pericles and delivers his lines with clarity, fluidity and passion. Sarah Chapman stands out as Pericles’ daughter Marina, the weight and grace she brings to her character anchoring every scene she’s in. Tohry Petty is enjoyable to watch as Helicanus, Pericles’ most loyal subject and friend. Petty has a noticeably confident and mature stage presence and can be both earnest and hilarious. Jessica Osnoe is doe-eyed, gentle and regal as Pericles’ wife, Thaisa. Duana Burby keeps the story moving with affable expertise as Gower, the narrator of the tale.

The rest of the cast operates like a wellmade batch of playdough, at times splitting off into individual roles, other times morphing into whatever form is needed to serve the story and the main characters’ adventures and emotions. They carry chests, march with fire, twirl poles with ribbons and change T-shirts and roles, and whatever they’re doing, it’s fun to watch. Traycie Kuhn-Zapata and Austin Hendricks are two who particularly shine.

For a show that’s so boisterous, “Pericles” still manages to hit the deep tones of grief that come with the hero’s adventures. Pericles, dealing with the loss of a loved one, cries out to the sky: “O you gods! Why do you make us love your goodly gifts, and snatch them straight away?” I unexpectedly teared up. Any show that can sneak-attack me with tears after making me chuckle out loud a few minutes prior is a winner in my book.