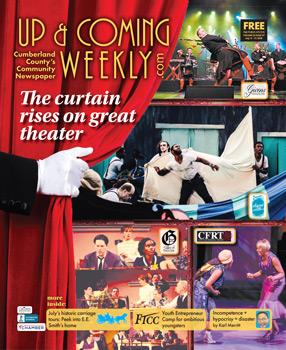 The greater Fayetteville area is graced with several outstanding theaters, each offering something unique to local audiences. In the heat of a Carolina summer, here are some performances to look forward to once the weather cools and the curtains rise on a great variety of theatrical productions.

Cape Fear Regional Theatre has been entertaining Fayetteville since the early 1960s. CFRT resides in a three-story complex where is serves more than 42,000 patrons each year, including almost 7,000 students.

The 2018-19 season opens Sept. 20 with “Music City.” This modern country musical is set in Nashville and tells the story of three young songwriters who are broke but ambitious. With great music, grit and a lot of heart, this show has all the makings of a hit with notes both old and new. The show runs through Oct 7.

Oct. 25-Nov. 11, “Peter and the Starcatcher,” based on the 2004 novel of the same name, tells the backstory of Peter Pan, Captain Hook and the rest of the characters from the much-loved story. In true Peter Pan “never grow up” spirit, the adventure includes pirates, friendships and, of course, heroes.

Dalton Trumbo. He was a screenwriter and novelist. He was blacklisted and sent to prison for standing up to the House Un-American Activities committee in 1947 when the committee investigated communism’s influences in the film industry. A member of the Hollywood Ten, he continued to work using pen names and winning awards. This two-character play runs Feb. 28-March 17.

Bekah Brunstetter’s “The Cake” tells the story of a North Carolina native who comes home to get married. Her choice of partners causes quite the stir. A comic drama, “The Cake” will onstage April 4-21.

Rhythm and Blues close out the season with “Memphis,” a Broadway show with four Tony Award wins in 2010, including Best Musical. Take a journey to 1950s Memphis with its African-American clubs for a tale of unlikely fame and forbidden love.

The Gilbert Theater prides itself on being a semi-professional theater that produces creative, innovative plays and events to stir audiences and students of its conservatory to explore and contemplate the human condition through the talents of local and guest artists.

“Godspell” opens Gilbert’s season Sept. 21 and runs through Feb. 17. Based on the Gospels of Matthew, Luke and John, “Godspell” turns parables into a musical.

A perennial favorite, “It’s a Wonderful Life” runs Nov. 23-Dec.16. Based on the 1946 movie starring James Stewart, the play tells the story of George Bailey and his guardian angel, Clarence. Bailey is ready to give up and end it all until Clarence shows George that each life really does matter.

Feb. 1-17 features “Doubt,” which played on Broadway in 2005 and 2006, winning the 2005 Pulitzer Prize for Drama and Tony Award for Best Play. Set in the fictional St. Nicholas Church School in the Bronx in 1964, Sister Aloysius suspects Father Flynn of being inappropriate with an altar boy. She pulls out all the stops to make her case, wreaking havoc along the way.

C.S. Lewis’ classic “The Lion, The Witch and the Wardrobe” opens April 5 and runs through April 21. In the land of Narnia, talking animals and mythical creatures are the norm as Lucy, Edmund, Peter and Susan Pevensie take on the White Witch.

“The Laramie Project” closes the season, running May 30-June 9. In 1998, gay University of Wyoming student Matthew Shepard was murdered in Laramie, Wyoming. The play retells the story based on hundreds of interviews with citizens of the town.

Founded in 2012, Sweet Tea Shakespeare’s mission is to “celebrate the wonder of Shakespeare’s inventions of language, story and stagecraft by providing simple, elemental, magical theatre experiences of his and other remarkable works in an accessible atmosphere of beauty and community.”

Aug. 21-Sept. 2, “The Comedy of Errors” plays at the 1897 Poe House at the Museum of the Cape Fear Historical Complex and continues Sept. 5-8 at Holy Trinity Episcopal Church. One of Shakespeare’s early plays, mistaken identity and a bit of slapstick combined with wordplay and puns make this a must-see.

Modifying plays to accommodate improvisation and audience participation, the LIT series will perform at various locations throughout October and November, including at Paddy’s Irish Public House Oct. 4, 11 and 18, and at Fainting Goat Brewing Company Oct. 25. Taking the tragedy of “Othello” and making it a bit lighter, the troupe said of the show: “The lighter signatures of the LIT series blend with the darker notes of the story for a bold and satisfying new flavor with an element of jealousy.”

Dec. 6-8 and 13-15, Holy Trinity Episcopal Church hosts “Behold: A Folk Christmas Cantata.” Celebrate the season with STS’ musical performance. With a full slate of Christmas songs to share, the cantata is sure to get you in the Christmas spirit.

STS presents “Sweeney Todd” Jan. 17-Feb. 2 at Fayetteville Pie Company. Sweeney Todd first appeared in a story called “The String of Pearls” in 1846. A relatively modern story for the troupe, don’t miss the misadventures of the Demon Barber of Fleet Street and his partner in crime, Mrs. Lovett.

“Maid Marian,” part of STS’ Honey series, plays April 25-28 at Fayetteville State University and May 2-5 and 9-12 at the Poe House. The Honey series showcases women through shows with strong female casts. What will that mean for this interpretation of the Robin Hood story?

The season ends with “Richard III” and “The Merry Wives of Windsor” in repertory June 4-23 at the Poe House.

As a part of UNCP’s homecoming celebration, GPAC presents “Hotel California: A Salute to the Eagles” on Oct. 19. With three decades of experience, this band has performed with such groups as REO Speedwagon and The Doobie Brothers.

“Comte Dracula: A New Musical Drama” was written by Lumberton native and award-winning composer of classical and Broadway music, Mark Andersen. “Comte Dracula” is an original musical making its world premiere on the stage of GPAC Oct. 27.

“Rudolph The Red-Nosed Reindeer” takes the stage Dec. 2. Come and get in the holiday spirit with Rudolph, the Abominable Snow Monster and all your favorite characters.

Enjoy the hit songs of Motown Jan. 12 with “Good for The Soul – Motown Revue.”

The Red Hot Chilli Pipers, a Scottish bagpipe band, will rock GPAC March 20. Not to be confused with the world-famous American rock band, The Red Hot Chili Pipers hail from Scotland and have become well-known for their incredible covers of songs by Journey, AC/DC, and even songs like “Amazing Grace.”

Four members of the original “Jersey Boys” cast make up The Midtown Men. Join this dynamic group of Tony Award winners and nominees for a memorable night of classic 1960s hits April 15.

For more information about the shows or to become a season subscriber or renew past subscriptions, call the GPAC Box Office at 910-521-6361 or visit www.uncp.edu/gpac.