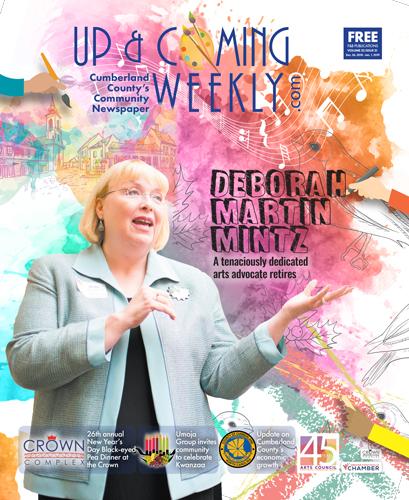 Scene: the early 1980s at Cross Creek Mall. In a music store, a recent Army-spouse transplant and theater actress, Deborah Martin Mintz, spies a cassette tape of one of her favorite Broadway musicals, “Cats.” It is the only copy in the store. As she reaches for the tape, she encounters another hand reaching for the tape at the exact same time.

The other hand belongs to a longtime Cumberland County Schools elementary educator, Claire Mansfield, who invites her newly discovered friend to dinner.

That dinner was the beginning of Mintz’s journey into the Cumberland County arts scene.

Today, though she might not admit it, Mintz holds the unique distinction of having significantly impacted the development of nearly every arts and cultural institution in the county. Early this year, she will retire from a 25-year career working with the Arts Council of Fayetteville/Cumberland County. For 17 of those years, she served as its executive director.

That dinner in the early ’80s led to Deborah meeting the community of creatives and visionaries in this area who were not then as well-known or easy to find as they are today. At that time, there were only two major theaters in town: Fort Bragg Playhouse and Fayetteville Little Theatre, which would later be renamed Cape Fear Regional Theatre.

Through the dinner, Mintz connected with Bo Thorp, FLT’s founding artistic director. Soon, Mintz was volunteering backstage for FLT’s production of “Annie,” and soon after that, she was hired as FLT’s box office manager in addition to acting both there and at FBPH. One of her first roles was as Lenny in “Crimes of the Heart,” directed by Thorp.

Four years later, Mintz was at a crossroads. “Both my parents had died, and I’d gotten a divorce,” she said. “My mother died when I was 29, and my dad died right after.” On top of that, she’d already begun the process of moving to Fort Meade, Maryland, with her now-former husband.

Thorp reached out to Mintz and encouraged her to move back to Fayetteville and work for FLT, which had at that point been re-christened Cape Fear Regional Theatre.

“I remember thinking, if ever there was a woman in transition, here it is,” Mintz said. She accepted Thorp’s offer, coming on as CFRT’s developing and marketing director and later moving up to associate director.

Eventually, she needed to slow down from the breakneck pace of working both onstage and behind the scenes in theater.

That’s when she accepted a job offer from the Arts Council, joining the staff in 1993 as associate director. The Arts Council had been founded 20 years prior to Mintz’s arrival by visionaries from organizations like FLT, Junior League of Fayetteville and Fayetteville Symphony Orchestra.

“Before I came to the Arts Council, I did not fully understand it,” Mintz said, noting that the function of an arts council in each county is unique. “Basically, our Arts Council receives funding wherever it can and then utilizes those funds to grow the community through the arts.

Mintz dove into her new role. She enjoyed using her theater chops to lead creative programing and planning. When the executive director left in 2000, Mintz accepted the position of interim executive director with the intention of returning to her previous position once a replacement was found. Then, six months later, disaster struck.

That disaster led to Mintz and other key players making state history in advocacy for the arts — but first, the backstory.

Less than a year into Mintz’s role as interim executive director, laws changed, and funds coming to local governments from the state were slated to disappear. That meant cultural organizations would not receive their fourth quarter funding, and arts funding would be zeroed out soon after. CFRT and FSO were just two of a multitude of cultural organizations that would suffer greatly diminished funding since the Arts Council would no longer be able to provide them with grants.

At this time, Mintz accepted the position of executive director and rolled up her sleeves. Over the next month, she was joined by advocates, including leaders from City Council, the Cumberland County Board of Commissioners and the state legislature, to nfind a solution. And they did.

Late in 2001, thanks to their efforts, a law passed in the North Carolina General Assembly that allowed 1.5 percent of the county’s Occupancy Tax, which is tourism-related, to be allocated for financial support of the arts. The reasoning was that the organizations the Arts Council supports play a primary role in drawing both tourists and residents to visit and stay in this community.

Thanks to the passing of this law, Cumberland County became the first county in the state to create at least one stabilized source of income supporting the arts — which allowed its cultural entities to thrive in ways never before possible.

During her 17 years as executive director, Mintz also led the development of some of this community’s best-loved events, including 4th Fridays, A Dickens Holiday and the International Folk Festival. In September, the Arts Council celebrated the 40th IFF, which it began producing right before Mintz came on as executive director.

Following her retirement announcement, Mintz has been showered with accolades from all corners of the community. At the Arts Council’s annual holiday party Dec. 4, Rand presented her with the Order of the Long Leaf Pine, the highest civilian award in the state. County Commissioner Larry Lancaster honored her with a public proclamation, calling her “a true pillar of the community, a champion of the arts and a dear friend to many.”

Also at the holiday party, the Arts Council staff presented Mintz with a painting of Cayley, Mintz’s beloved dog that she adopted from a shelter, commissioned by local watercolorist Kathy Flood. Wilmington artist Paul Hill has also been commissioned to create a piece of public art that will go up near the Arts Council building to honor Mintz. The project is being spearheaded by Lindstrom and Jean Schaefer Moore, who are both past presidents of the Arts Council Board of Trustees.

At the Fayetteville City Council meeting Dec. 10, Mayor Mitch Colvin presented Mintz with the City Key and Coin, in honor of her “devoted interest and unwavering commitment to the city of Fayetteville.”

Ending Mintz’s career on a truly prestigious note, in November — without applying for it — the Arts Council received Ovation’s Stand for the Arts award, which is given to only 12 organizations in the United States each year. A representative from Ovation, America’s only arts TV network, traveled from Los Angeles, California, to present the award to the Arts Council at its 45th Anniversary gala Nov. 8. It came with a $10,000 grant. The award is given to recipients based on their level of community outreach and engagement; ability to create inclusive access to artistic programming; and innovative approach to arts education and skills development.

Craig Hampton, who served as the city’s special projects director for 29 years, worked with Mintz often during his career. “She always made sure everyone was heard and considered,” he said. “She knows how to guide what comes out of a discussion with an understanding of both the art and the practical side.”

Mary Kate Burke, who moved here in 2017 to become CFRT’s third artistic director in its 55-year history, said, “Coming from New York just over a year ago, I was very excited to move to Fayetteville because I was so aware that the business leaders in the community knew how important the arts were to quality of life here. And I think a lot of that is the unceasing work that Deborah and the Arts Council at large have done.”

A national search is underway to fill Mintz’s position, which she will vacate early this year. Mintz said that person will need “tenacity, passion and yet an understanding that your tenacity and passion will never do it by itself. It is the love and passion of the community.”

She added that in her retirement, she looks forward to volunteer work she’s never before had time to do, and that she will “continue to support this community that supported me.

“When I was that woman in transition and came here, this community embraced me. As Bo Thorp said, ‘This community is about yes. If you want to come here and you want to make a difference, you are a champion.’”