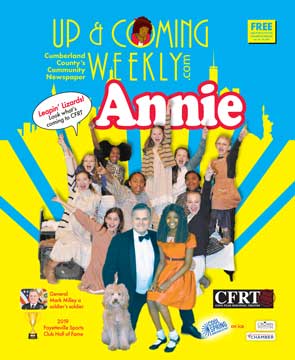 “Annie,” the family-friendly musical based on the “Little Orphan Annie” comic strip, debuted on Broadway in 1977 and has endeared itself to audiences the world over ever since with such crowdpleasing tunes as “Tomorrow!” and “It’s a Hard Knock Life.” In the play, Orphan Annie sets out to find her parents and meets many interesting characters, including millionaire Daddy Warbucks, along the way. Starting Jan. 31, Cape Fear Regional Theater brings “Annie” to town with a stellar cast, including Robert Newman in the role of Daddy Warbucks.

Although he also starred in “General Hospital” and “Santa Barbara,” Newman is best known for portraying Joshua Lewis for 28 years on the soap opera “Guiding Light,” a role for which he earned two Emmy nominations for Outstanding Lead Actor in a Drama Series.

She added, “Our Ms. Hannigan will be Erin Fish, who just performed the same role on the national tour of ‘Annie.’”

CFRT’s “Annie” will be directed and choreographed by Robin Levine.

Backstage, the cast is no less professional. Be it the stark simplicity of “Miss Saigon” or the rollicking onstage bar of “Music City” or a romp through the medieval landscape of “Monty Python,” sets at CFRT productions have always been impressive. Designing the set for “Annie” is Charles Glenn Johnson, who also designed last season’s hit “Crowns,” according to Burke.

Sarah Harris, who was associate costume designer for last season’s “Sense and Sensibility,” is designing “Annie’s” costumes. Once her drawings are finalized and approved by the director, Harris will consult with Andi Nicks, costume shop manager, to determine what can be pulled from CFRT’s costume inventory to bring Harris’ artistic renderings to life.

After meeting with the director to discuss the desired mood and ambience of any given show, a professional lighting designer creates a lighting “plot” for each CFRT production and submits a detailed drawing of how the instruments should be hung and focused. “There are usually over 100 instruments that get hung in the air in different configurations for each show,” said Burke. Staff technicians at CFRT then run the lights according to the plot.

Jillian Zach, a Julliard graduate, is the musical director for “Annie.” Local professionals comprise the band for the show. A piano accompanies the actors during rehearsals, but the entire band — along with all the designers and technicians — assemble for what is known as a sitzprobe, where the actors hear the actual instruments for the first time, and then a wandelprobe, which is a walk-through for blocking with the band.

Once the sitz and wandel are completed to everyone’s satisfaction, there is a tech rehearsal followed by a final dress rehearsal before opening night takes place.

“The whole show is mounted in only three weeks,” said Burke. “So, between the first rehearsal and the first preview, there are only 20 rehearsals and a total of 100 hours rehearsed.”

“Annie” opens Jan. 31 and will run through Feb. 24 with show times at 7:30 p.m. and matinees on most weekends. Tickets cost from $17-$32. Visit www.cfrt.org for information about tickets and performance dates. “Annie” is so family-friendly that CFRT offers a special cast meet-and-greet and a sing-along and dance especially for community children. See the website for details.

Newman is no stranger to North Carolina nor to the character he’ll portray in “Annie.” Some would say he has a heart just as big and just as soft as Daddy Warbucks’.

In the summer of 2010, Newman played Daddy Warbucks for the North Carolina Theatre’s production of “Annie.” For that production, he partnered with St. Baldrick’s Foundation in its quest to raise money for childhood cancer research and let St. Baldrick’s publicly shave his head. The theater joined in the effort and gave 20 percent of ticket sales to the foundation, too. “We were able to raise a good bit of money for the charity,” Newman said. “After the fact, I was talking to my wife about maybe keeping my head shaved. She was not having it and quickly said, ‘Robert. Grow your hair back.’”

When Burke reached out to the North Carolina Theatre about Newman, the staff there remembered him fondly. “They were so effusive about him. They said he’s an incredible actor and an even more amazing human,” she said.

While Newman enjoyed playing Daddy Warbucks before, he said he is looking to bring something fresh to the experience at CFRT. “There is nothing worse than an actor who says, ‘I’ve played this role before. This is how it is supposed to be done,’” he said.

One of the things that makes acting so rewarding for Newman, he said, is the human aspect of it. When Newman was in college, he had plans to become a psychology major. In his third year, though, he found acting. “And I discovered the two are very similar,” he said. “They are both a study of the human dynamic.”

Newman is impressed with the way the play as a whole is coming together. “Robin Levine is directing it, and I am excited about where she is taking this production,” he said.

While “Annie,” which ran for almost six years on Broadway starting in 1977, is not a new story, it’s one that audiences love. It’s heartwarming. It will make you laugh, and it will make you cry.

“It is the right time for a play like this,” said Newman. “There is so much divisiveness in the world today, and this is a place where the audience can leave that behind for two hours and come and enjoy a heartwarming story.”

As for his other North Carolina connection, Newman has participated in several charity golf tournaments around the state. He calls golf his Zen time, when he can leave his worries behind and focus on something he is, in his words, “sometimes good at and other times not.”

So far, his experience locally has been positive. “Everyone here is so nice. The people here are great. I have only been in town a few days, and I already love it here.”