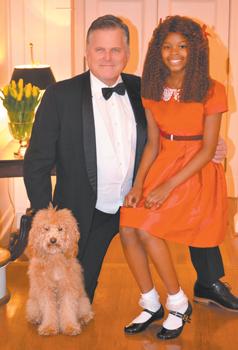 From Mary Kate Burke’s soft rock introduction to the final curtain, the opening night performance of Cape Fear Regional Theater’s production of “Annie” was nothing short of spectacular, often drawing cheers from the full house.

With the book by Thomas Meehan, lyrics by Martin Charmin, music by Charles Strouse and a setting in the midst of the Great Depression, the adventures of a young orphan in search of her parents touches on a theme still relevant today. The contrast between Hooverville, where Annie takes refuge, and her life as a guest in Oliver Warbucks’ mansion emphasizes the vast gap between the very rich and the majority of citizens just struggling to eat and keep a roof over their heads. Yet, despite the dire circumstances in which the musical is set, the message of “Annie” is hope.

The Orphan Ensemble captivates from the very beginning. Lily Hogge, playing the title role, has an amazing vocal range for such a young girl. She plays Annie with tomboy-ish enthusiasm and transitions seamlessly from wistfulness to defiance to winsomeness as the situation demands.

Thanks to the orphans, the mood never descends to pathos. Their superb rendition of “It’s the Hard Knock Life” and subsequent heckling of Miss Hannigan convince the audience these are resilient little girls determined not to let the circumstances of their lives break them.

Erin Fish’s Miss Hannigan, a role she played on the national tour, is the villainess we all love to hate. Yet there is a certain upbeat cheerfulness to her chicanery. Fish plays Miss Hannigan for laughs, of which there are plenty, which allows the audience to see her as overwhelmed by all the little girls in her charge, rather than evil.

Greg King, as Rooster Hannigan, and Jodi Bluestein, as Lily St. Regis, ooze a greasy, bumbling, minor criminality from the first moment they set foot onstage. Not to put too fine a point on it, but their “Easy Street” number reminds us of why we really play the lottery.

Robert Newman’s character transitions believably from the gruff, enormously rich and influential Oliver Warbucks to the openly affectionate “Daddy.” This is in large part due to Newman’s seeming lack of celebrity ego and to the positive onstage chemistry between Newman and his young co-star.

Newman is believable as a successful, no-nonsense businessman with time for little but work when we first meet his character. We watch him mellowing before our eyes as his character goes from bellowing his disgust at President Roosevelt to humbly asking for the president’s help on Annie’s behalf.

Finally, we watch him opening himself to the charms of his winsome assistant, played by Becca Vourvoulas, and expressing completely believable affection for Annie.

Newman brings star power to Fayetteville, having appeared for 28 seasons as Joshua Lewis on the longrunning TV program “Guiding Light” among many of his stage, film and television credits. Yet there was no sense of his celebrity status evident onstage at CFRT on opening night. He is a generous actor. He commanded the stage when appropriate to his character and managed to be just another member of the cast whenever the script called for some other character to take center stage.

Newman, Fish and Pegues are supported by a cast of talented actors, a few of whom appeared for the first time at CFRT on opening night.

Artistic direction for all CFRT productions is provided by Mary Kate Burke. “Annie” is ably directed and choreographed by Robin Levine, assisted by Sebastiani Romagnolo. Both the set, designed by Charles Glenn Johnson, and the costumes, designed by Sarah Harris, are simple yet evocative of the era in which the musical is staged. Musical direction is supplied by Jillian K. Zack. The orchestra is superb, taking care to enhance rather than overwhelm young voices.

“Annie” runs through the evening performance on Sunday, Feb. 24, with a special Sensory Friendly performance scheduled for Sunday, Feb. 10. Contact the CFRT Box Office at 910-323-4233 Tuesday-Friday from 1-6 p.m. for more information and ticket prices.