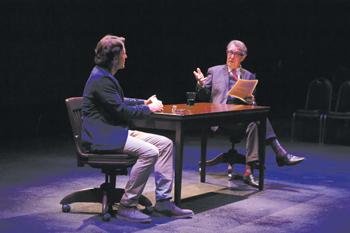 Cape Fear Regional Theatre’s production of “Trumbo,” running through March 17, is not an easy play to review. The show’s program contains two pages of historical context and another two-page glossary to help orient theatergoers. There is no stage, no script and no action. To understand what plot there is, it helps to be a student of American political history. That said, “Trumbo” is a compelling drama.

Spanning the period from 1947-1960, during which time capitalism and communism were locked in a pitched battle for global ideological dominance, the play tells the story of Dalton Trumbo, a highly successful, award-winning Hollywood screenwriter who ran afoul of the U.S. House Un-American Activities Committee.

Written by Christopher Trumbo, Dalton’s son, and ably directed by CFRT Artistic Director Mary Kate Burke, much of the show’s dialogue is taken straight from Dalton’s prolific correspondence between friend and foe alike. The juxtaposition in those letters between the noble and the mundane is both brilliant and spellbinding.

We meet Dalton for the first time as he defiantly takes on his HUAC interrogator only to watch his defiance dissolve into irritability as he pens a longwinded complaint to the phone company.

The audience is held rapt during the reading of a high-minded moral defense — with implications for our current political climate — only to dissolve in laughter minutes later as Dalton writes his college-bound son a hilariously ribald piece of fatherly advice.

The role of Dalton is played by Larry Pine, whose screen credits include “Bull,” “House of Cards,” “Madame Secretary” and “The Good Wife,” among many others. Pine plays Trumbo as an unfailingly erudite curmudgeon who manages to hold onto his sense of humor as the world shifts beneath his feet and he plunges from fame and fortune to impecunious infamy, dragging his family along with him.

That Dalton’s family unfailingly supported him is made evident by the role of his son Christopher in the play, who acts as the glue that holds the entire performance together. Played with endearing diffidence by Michael Tisdale, whose credits include “Law & Order” and “Third Watch,” Christopher provides the context for his father’s story and helps the audience see beyond the bluster to the man he loved.

The play ends with an unflinching, yet humorous, summing up of the cost of hewing to one’s convictions.

Whether Dalton was a martyr or a menace depends upon one’s political persuasion. But politics is a pendulum that swings both ways — which should make respect for First Amendment rights a matter of universal concern. That this has not always been so is what makes “Trumbo” an important piece of theater. Burke and CFRT are to be commended for bringing it to town.

Showtimes and ticket information are available from the CFRT box office at 910-323-4233. The box office is open Tuesday-Friday from 1-6 p.m. and one hour before showtimes. Learn more at www.cfrt.org.