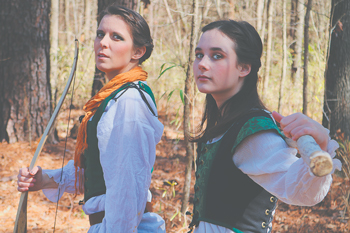 I was recently invited to view Sweet Tea Shakespeare’s “Maid Marian” at the historic 1897 Poe House. The production was enchanting. The brick-paved courtyard was lined with homemade quilts and Turkish carpets for guests to sit on while enjoying the show. The cast interacted with guests, introducing one another, explaining the history of the play and creating opportunities for the audience to enjoy it on many levels. STS raffled a walk-on part to audience members, which proved to be a hilarious addition to the production. STS also auctioned an opportunity to sit on a fabulous velvet lounge.

The story of Robin Hood has enthralled audiences since the 16th century, but Jessica Osnoe, an actress and playwright with the company, has reimagined it from a decidedly female perspective for the company’s Honey Series, celebrating women in theater.

It would have been easy for Osnoe to take a hyperfeminist perspective in her rewrite, depicting men as accessories and usurping the traditional legend of Robin Hood for Marian. But Osnoe used a gentle approach, implying Marian’s evolution as a vigilante, or benefactor to the masses, ran parallel with Robin Hood. Instead of removing him from the scenario, she created a level playing field on which they met as true equals. This, in turn, leaves the audience with the hope of their eventual romance.

The play begins as the devious Sheriff of Nottingham suggests his disciple, Guy of Gisborne, marry Lady Marian so he might control her family’s estate — and their profit. The high-borne Marian, played by Jen Pommerenke, and her younger sister Emma, played by Laura Voytko, abandon the estate and flee to Sherwood Forest with several women from the village.

Marian and Emma are joined by Marian’s cousin Eleanor, played by Osnoe. They teach other women to fight, then disguise themselves as performers so they can move about the countryside without drawing the sheriff’s attention. Then, they plunder! They rob the rich to feed the poor in proper Robin Hood tradition. Marian and her all-girl gang establish themselves as legends amongst the villagers and proper criminals with the sheriff and Sir Guy.

Pommerenke wows the audience with her performance. She gives depth to what has traditionally been a two-dimensional character. Her Marian is strong, innovative and, at times, humorous.

And Osnoe brings strength and determination to the character of Eleanor. She’s a stabilizing influence for Marian, a voice of reason in their world of chaos.