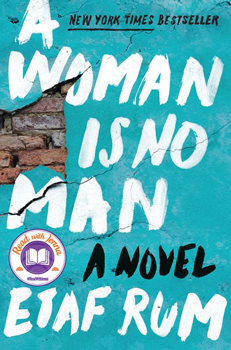 Rocky Mount writer Etaf Rum, author of “A Woman Is No Man,” grew up in a Palestinian immigrant family in Brooklyn, New York, in the 1990s and 2000s. Her book is based on experiences in that community. We first meet Isra, a 17-year-old girl living in Palestine. Her family arranges marriage to an older man, Adam, who owns a deli and lives with his parents and siblings in Brooklyn, New York. Living in Adam’s family’s basement, Isra becomes a virtual servant to Adam’s mother, Fareeda, who pushes the couple to have children, males who can build the family’s reputation and influence. Isra produces four children, but because they are all girls Fareeda shows her displeasure.

Years later after Adam and Isra die, Fareeda raises the girls. The oldest, Deya, is a high school senior. Fareeda looks for a Palestinian man for her to marry. Deya wants to go to college, but she is afraid to bolt her family and the community’s customs. She knows of women who have stood up against male domination and then faced beatings and even death.

As Rum explains, the book “meant challenging many long-held beliefs in my community and violating our code of silence.”

Elaine Neil Orr’s novel, “Swimming Between Worlds,” is set in 1950s Winston-Salem and Nigeria. The coming-of-age and love story is enriched by the overlay of the Nigerian struggle and the civil rights protests in Winston-Salem.

Tacker Hart, with an architectural degree at N.C. State, got a plum assignment to work in Nigeria, where he became so captivated by Nigerian culture, religion, and ambience that his white supervisors sent him home. Back in Winston-Salem, he falls for Kate Monroe, from one of Winston’s leading families. They become connected to Gaines, a young African-American college student who drags Tacker and Kate into his work organizing protest movements at lunch counters.

Orr blends civil rights and romance for a poignant and unexpected ending.

He describes how Kerr Scott defeated the favored gubernatorial candidate of the conservative wing of the party in 1948 and adopted a liberal program of road-building, public school improvement and expanded government services. He ran for U.S. Senate in 1954 as a liberal in a campaign managed by future Governor Terry Sanford. Once elected, Christensen writes, Scott nevertheless joined with fellow southerners to oppose civil rights legislation and became “just another segregationist, little different from most of the southern caucus.”

Christensen then follows the political career of Kerr’s son, Bob Scott, who when elected governor in 1968, faced mountains of bitter controversies in the areas of race, labor, student unrest and higher education administration.

All are dead, and Crowther, without funeralizing, sizes up their character and contributions.

Crowther’s essay about blind musician Doc Watson is my favorite. Neither blindness nor the loss of his beloved son, Merle, could keep him from using his music to bring people of all backgrounds and political persuasions to be moved by his songs and guitar playing.

We need Crowther’s freedom fighters and hell raisers, but the real heroes will be folks like Watson who bring us together.