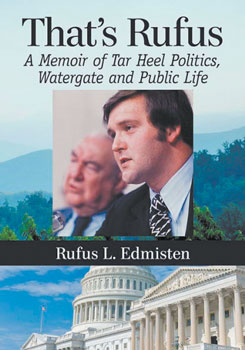 In this time of political rancor and hate, it is nice to find something that old time politicos agree on regardless of political affiliation, when they answer this question: Who is North Carolina’s most colorful political figure?

The answer today is clear: It is Rufus Edmisten, Democratic nominee for governor in 1984, attorney general, secretary of state and author of a recent book, “That’s Rufus: A Memoir of Tar Heel Politics, Watergate and Public Life.”

Edmisten begins his book not with his birth and growing up on a farm just outside the mountain town of Boone but with his favorite story. In 1973, he served the president of the United States with a subpoena on behalf of the Senate Watergate Committee, which was led by another North Carolinian, Sen. Sam Ervin. Serving the president with this demand for the records ultimately led to President Nixon’s resignation. Edmisten’s position as Ervin’s right-hand man made him a nationally known personality that he leveraged into political stardom.

Edmisten makes the story a good one. He describes the frantic rush to prepare the subpoena document, including a heated discussion about using correction fluid to cover a mistake and a ride to the Executive Office Building where the president’s lawyers respectfully accepted the subpoena. Then the cheeky Rufus reached in his pocket, pulled out his copy of the Constitution and gave it to the president’s lawyers in a pointed message that they should study it.

This incident and Edmisten’s work with Sen. Ervin were the launch pad for his political career.

Edmisten’s prelaunch story is set in the North Carolina mountains on a farm near Boone, where he grew up tending cows and pigs and working fields of cabbages and tobacco. He made extra money plowing garden plots for his neighbors and used a tractor to visit his kinfolks around the mountains.

After success in athletics, Future Farmers of America, student politics and academics in high school, and almost winning a Morehead Scholarship, he landed at UNC-Chapel Hill. From there, he made his way to Washington, D.C., teaching at a Catholic high school, attending law school at George Washington and securing a low-level job on Sen. Ervin’s staff. Edmisten soon became one of the senator’s full-time trusted assistants in the Watergate-Nixon impeachment matter.

The “That’s Rufus” chapter on Watergate is good background for those following the current battle between Congress and another president.

He returned to North Carolina in 1974 and mounted a successful campaign for attorney general. His triumph over a host of prominent Democrats gave notice he would run for governor someday.

That day came in 1984 when Gov. Jim Hunt ran for the U.S. Senate and a host of Democrats lined up to run for the Democratic gubernatorial nomination. Edmisten won in a brutal primary runoff against Eddie Knox and then lost the general election to Jim Martin.

Some believe he lost because he made disparaging remarks about barbecue. His version of that incident is, by itself, worth the price of the book. But Edmisten says it was Ronald Reagan’s “sticky coattails” that “swept both me and Jim Hunt away from our dreams. We were not alone, either. The sweep was broad and far reaching.”

Edmisten felt crestfallen and abandoned. “The ache in the bottom of my stomach was so great nothing appealed to me except finding some dark place to crawl away and hide,” he writes. “I swear I saw people cross the street so they wouldn’t have to talk to me.”

“That’s Rufus” describes how Edmisten came back from that defeat, won election as secretary of state, lost that position in disgrace, came back as a successful lawyer and lobbyist and learned lessons that will be important for every citizen.

In a future column I will share some of that wisdom.