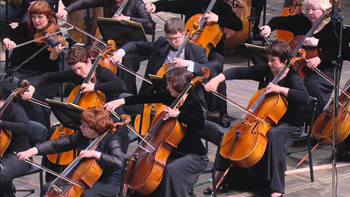 Live from Russia: The Siberian State Symphony Orchestra embarked on its eight-week United States tour in January 2020. Music played by the acclaimed 80-member orchestra from Krasnoyarsk, Russia will fill the Givens Performing Arts Center on Feb. 18, at 7:30 p.m.

The orchestra dates back to 1977 in the former Soviet Union, winning the reputation as one of the premier orchestras of the time. After the political regime change in the Soviet Union, the Siberian State Symphony Orchestra was allowed to tour internationally and was received on the international stage with much praise.

Considered a culturally important institution, the Siberian State Symphony Orchestra eagerly shares the musical arts of Russia with the world through concerts and albums.

During the concert Peter Laul, award winning pianist and regular performer with the St. Petersburg Philharmonic and the Lincoln Center in New York, as well as other venues around the globe, will entertain guests with a solo performance.

Attendees will enjoy Tchaikovsky’s Piano Concerto No. 1, Shostakovich’s "Tango" from the ballet “Bolt,” and Mussorgsky’s "Pictures at the Exhibition."

Fun fact: Tchaikovsky’s Piano Concert No.1 was personally conducted by Tchaikovsky at the opening of Carnegie Hall in New York City in 1891. This was a rare occasion for a well-known composer of 19th Century European Romantic period music to come to the United States to perform.

When asked how the GPAC is able to host such an internationally acclaimed orchestra, Chad Locklear, Marketing Director for the Givens Performing Arts Center, stated, “The GPAC is committed to bringing high-caliber and diverse arts experience to our community. This orchestra meets that category because it has a reputation as being one of the best in Russia.”

“In the digital age of Netflix and social media, nothing will ever take the place of experiencing the arts live in person,” he said. “I hope attendees will come away feeling appreciative and inspired to continue to attend and support the arts.”

The performance is expected to last 78 minutes with a 15 minute intermission in between. The GPAC seats 1,600 people and there are discounts for groups of 10 or more and for children under age 13.

Tickets may be purchased by phone at 910-521-6361 or online using the link found on their website. Tickets may also be purchased in person at the GPAC box office. Tickets prices are between $21-$31 for adults, $18 for children, $16 for faculty and staff, and $5 for UNCP Students. Visit https://www.uncp.edu/resources/gpac/professional-artist-series/siberian-state-symphony-orchestra for more information.