‘Where the Winds Never Stop: The Hildreth Project’ 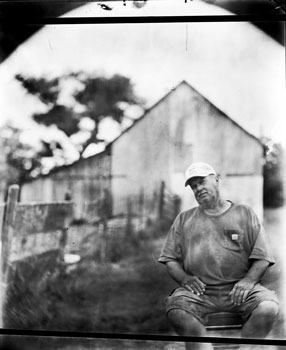 You will know someone or will have seen someone that is being exhibited at Gallery 208 in the new exhibit titled “Where the Winds Never Stops: The Hildreth Project.” How is that possible when you have probably never been to Hildreth, Nebraska? The photographer, Shane Booth, in a series of photographs, has captured the essence of part of an iconic Americana. I could go on and on about his extensive professional resume. Still, to understand how a photograph moves from a good photograph to a great photograph, I would like to share insight into his 16-year personal back story.

The portrait photographs in “Where the Winds Never Stops: The Hildreth Project” are of rural white America (it’s Nebraska!), but you can be of any ethnicity and see someone you think you may have met or have seen before … that is the genius of this body of work and has been the artist’s oeuvre for the past 20 years – to capture the essence of something beyond an individual’s identity, instead, the spirit of the many in a single portrait.
In comparison, Cindy Sherman, a historically significant contemporary photographer, has created thousands of photographs of herself, dressed in disguise, to portray an iconic American female “type” that most people, in America, would recognize — a movie star, a homemaker, a sun-burned beachgoer. Booth has done the opposite of Sherman. He has photographed a real individual who evokes the essence of a familiar type.
A powerful incentive to see the exhibit, visitors to Gallery 208 will immediately experience a sense of peacefulness and quietude as you scan the exhibit. Yet, upon closer inspection, some of the out-of-focus elements in the photograph are eerily disconcerting. The experience of calm is not by accident. It is the result of his professional history but also little-known facts about his past.

In 2002, while a graduate student at the Savannah College of Art and Design, Booth found the 1867 camera at an antique store during a visit home to Nebraska. In 2004, he graduated from the Savannah College of Art and Design with an MFA in photography. He began commuting, for a short time, from Savannah, Georgia, to teach “one” art survey class at Fayetteville Community College. Booth eventually moved to Fayetteville, worked several jobs in restaurants and a frame shop to survive. In 2005, he was hired to teach as an adjunct art instructor at Fayetteville State University. He became a full-time art faculty at FSU in 2007.

In 2013, Booth received a North Carolina Arts Council grant to have the 1867 large format camera restored. He has been using it ever since to create bodies of work. Although the camera equipment Booth uses changed, the idea of portraiture and the essence of what it means to portray an individual is not new.

The photographs in “Where the Winds Never Stops: The Hildreth Project” are the direct result of Booth’s knowledge of the art and craft of photography, his experience as an artist and an 1867-barrel lens camera he has restored. But the heart of Booth’s work as a mature artist lingers as a result of his 2004 MFA thesis exhibit. That year, Booth’s MFA thesis dissertation and exhibit focused on social photography; the title of his exhibition was “Pigeonhole.”

For Booth, coming from Nebraska to Savannah, Georgia, he is the first to admit he was a very naïve young man. “Savannah was not like Nebraska. I always felt oddly different. I was naïve about the racism I experienced for the first time, the stereotyping of people — even crime. For the thesis exhibit “Pigeonhole,” I did a series for portraits — combining my love of vintage things with the idea of how people are stereotyped.”

Unknowingly and indirectly, the heart of Booth’s work in this exhibition, and for most of his work since the 2004 MFA thesis, has always been about the essence of what it means to portray an individual. Even when Booth returns home each summer to photograph the Nebraska landscape, his landscapes are about the idea of portraiture and identity — what it means to grow up in rural Nebraska.
When you visit “Where the Winds Never Stops: The Hildreth Project,” you are seeing the work of an artist whose goal is to photograph every person living in Hildreth. When asked why, Booth said, “For five generations my family has called Hildreth, Nebraska, home. I return to the town every summer looking for familiar faces that make up my memories and the heart of this small farming community. As memories fade, people pass on, and younger generations want to live a more updated life, I feel it is important to document the members who remain in this small village. For me, they represent the identity of a group of people that are slowly being lost, a group that is defined by their strong generational connection to (their) environment.”

The exhibit will be up for three months, and the opening reception, to meet the artist and hear the artist talk about his work, was moved until August. Before August, when you visit Gallery 208, here is insight into how Booth can create the essence of the exhibition you will experience and how he interfaces with the subjects to take their portraits. “I wanted to document the spirit of Hildreth through portraiture,” said Booth. “I place the subject in their environment, which usually consists of their barn or home. … I do not direct the subject or pose them in a particular way. I simply allow them to sit in front of the camera and form a relationship with the lens. Sometimes that relationship is an easy one, and at other times it can be a bit anxious looking. Each image has a 10-second development time due to the 1867-barrel lens I use on my 8x10 studio camera. Because of this long exposure, movement and blurring of the subject or background become part of the photograph. In a land where the wind never stops blowing, it is part of their story.”

Booth’s backstory has been shared, but it’s also important to highlight a few of his many achievements. Some of his most recent exhibitions include: “Open Call,” Southeast Center for Photography, Columbia, South Carolina, in 2017; “Bridges: Sharing our Past to Enrich the Future,” Hildegard Center for the Arts, Lincoln, Nebraska, 2017; “Collective Experiences,” Chiang Mai University Art Museum, Chiang Mail Thailand, 2017; “The Abandoned Landscape,” Southeast Center for Photography, Greenville, South Carolina., 2016; and “Looking Glass: Exploring Self Portraiture,” Lubeznik Center for the Arts, Michigan City, Indiana, 2015.

Some of the grants he received include the following: “Portraiture with 1867 Camera,” sponsored by Minden Opera House, 2108; “Shane Booth and the Personal Photography of a Life with HIV,” sponsored by Department of State, Federal, $7,000.00, 2018; “Artist in Residence,” sponsored by Willa Cather Foundation, 2016; and “Regional Artists Grant,” Sponsored by United Arts Council (North Carolina Arts Council), 2013.
There will be plenty of social distancing for visitors to “Where the Winds Never Stops: The Hildreth Project at Gallery 208 until August 2020. There will be an opening reception in August. Gallery 208 is located at 208 Rowan St. The gallery hours are 9 a.m.-4 p.m., Monday-Friday. For information call 910- 484-6200.