The wife of Jesus: the North Carolina connection 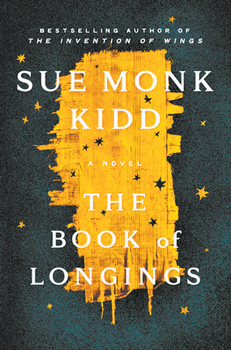 Did Jesus find a wife in North Carolina?

The answer is yes.

But the story is fictional, and the North Carolina connection is complicated.

Sue Monk Kidd is the best-selling author of “The Secret Life of Bees” and other popular books. Her latest, “The Book of Longings,” came out on
April 21. It tells the story of Ana and her marriage to a young carpenter and stonemason from Nazareth.

A short article in the May 17 issue of The New York Times headlined “Did Jesus Ever Tie the Knot? A New Novel Considers the Question” reported that Kidd, despite her deep connections to Georgia, wrote the new book in Chapel Hill, where she now lives.

Although the book is set in the Middle East of 2,000 years ago, the coming together of Jesus and Ana was framed in North Carolina.

The story begins in the year 16 A.D. Ana is the teen-aged daughter of the head scribe of Herod Antipas, son of Herod the Great, and, subject to the Roman overlords, the ruler of Galilee. Ana and her mother, father, aunt and servants live near Antipas’s palace in Sepphoris, a thriving town. Ana’s cousin and adopted brother, Judas, has left home to join with zealots fighting against the Roman occupation. Nearby Sepphoris is the poor village of Nazareth, where Jesus lives in a less-than-modest hovel with his widowed mother, Mary, and his siblings.

Unlike most other women of the times, Ana is well educated and writes stories of women heroes of the Bible. Although she cherishes her unmarried status, her parents arrange for her betrothal to an elderly wealthy man. When he dies before the wedding, they push her to become Antipas’s concubine.

Meanwhile, she has encountered Jesus, who walks each day from Nazareth to Sepphoris to work on a massive construction project for Antipas. The spark is immediate. She appreciates his deep connection to God, or as Jesus calls him when he prays, Abba or father. He appreciates her education and aspirations to write and promote the place of women.

Their marriage transforms her privileged life into hand-to-mouth poverty in the crowded house in Nazareth, where Ana does not get the warmest of
welcomes.

Kidd describes the smells and the constant chores of cooking, milking, feeding, sewing, petty jealousies and resentments that fill the lives of the struggling poor. Jesus is often gone for long periods to work on projects in other parts of Galilee, sometimes even going as far as the Sea of Galilee to work with fishermen.

Jesus’s search for God leads him to the preaching of John the Baptist. He becomes a follower, and then when John is arrested by Antipas, Jesus becomes a leader, leaving Ana alone with his family in Nazareth.

Ana herself offends Antipas and becomes another of his targets. For safety, Ana’s aunt takes her to Egypt, where she encounters another set of conflicts and challenges in a totally different environment in the great library city of Alexandria.

Ana is finally called to return from Egypt. She arrives in Bethany near Jerusalem just in time for a Passover dinner with Mary, Martha, Lazarus and Jesus, but Jesus is not there. The next day in Jerusalem, Ana watches as Jesus is carrying the cross towards the execution site. He collapses. Ana rushes to comfort him and say goodbye.

Then Kidd reconstructs the crucifixion experience in a way more horrible and poignant than any of the four gospels. She also offers a surprising explanation of why Judas betrayed Jesus.

That Ana’s story continues after Jesus’s death emphasizes Kidd’s and Ana’s belief that the exclusion and minimization of the role of women in the days of Jesus and today has been a tragic mistake.

Whether Kidd’s readers are true believers or skeptical inquirers, “The Book of Longings” will be an enriching and challenging read.