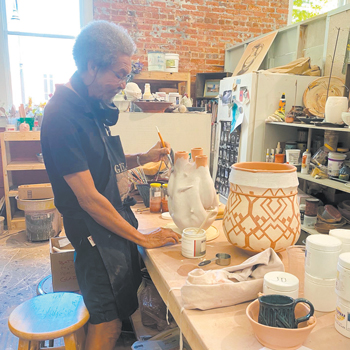 Cape Fear Studios will host “Retrospective - A Varied Path” featuring member artist Stanley Greaves through Oct. 20. Greaves is an internationally acclaimed artist from Guyana who now lives in Fayetteville. He is well-known for his colorful surrealist paintings which have made him popular in the Caribbean art world.

“I am showing examples of work I have done in different regions including recent woodworking activities,” Greaves said. “I have been making boxes, two of them are on show at the exhibition, which showcases a mix of sculptures, examples of my calligraphy and my poems in calligraphic form, and ceramics.”

The name of the exhibition, in effect, would be kind of retrospect because not all of the work exhibited is recent, he said.

Greaves’ exhibition as a member artist at Cape Fear Studios is a glimpse into the heart and soul of an internationally recognized artist, or ‘maker’ as he refers to himself, said Rose Kennedy, also a member artist.

“This is a rare opportunity to experience his work in painting, pottery and sculpture in an intimate, welcoming environment,” said Kennedy, who also serves as the retail gallery chairperson for Cape Fear Studios. “Stanley … is widely recognized throughout the world for his contributions to art and literature.”

Kennedy said Greaves’ artwork isn’t usually for sale, but he has generously donated a pottery piece to be auctioned benefitting Cape Fear Studio’s mission of providing arts and education to the community.

The pottery piece up for auction is called “Key Pot.”

“I had a collection of house keys that I collected over the years and always wanted to do something with that,” Greaves said. “And eventually, the thought came up that you know what, I can use some of these keys and put them on the pot. And that's why I named it a ‘Key Pot.’”

Greaves asks people to bring their own experiences to the exhibition, and he doesn’t think it's a necessity for the artist to explain the meanings behind the work.

“In order for people to look at the picture and read it and extract whatever they can from it. And in that way, those experiences are more valid to them instead of me giving them something,” he said.

Born to Guyanese parents, Greaves studied and lived in the United Kingdom, United States and Barbados. He doesn’t think living in different places has affected his art but instead made him more secure of it, as to not follow trends, he said.

Now living in Fayetteville, Greaves said he tends to avoid big metropolitan scenes and crowds stating the work he’s interested in doing is of no relevance to the art scene in larger
cities.

Although he has received many awards and prizes, including Guyana’s national honor ‘Golden Arrow of Achievement’ in 1975, Greaves says he hardly seeks art exhibitions.

“I am not a competitor, I don't feel the need to show myself that way,” he said, “I have been able to hold exhibitions from time to time, but that's just not for me.”

According to Kennedy, Greaves works in the pottery studio and is very engaging to talk to and a joy to watch as he intently works his magic with clay. He was a natural choice for a feature show because of his stellar work, introspective nature and international recognition, she said.

“Come in to absorb the workings of an extraordinary, creative mind and place a bid in the auction. His work is (usually) not for sale, so the auction is a great opportunity to own a special creation by Stanley,” she said.

Cape Fear Studios is located at 148 Maxwell St. in downtown Fayetteville. “Retrospective - A Varied Path” runs through Oct. 20. Admission is free to the public during their new hours of Wednesday and Friday from 2-5 p.m. and by appointment on Saturdays. For more information visit http://www.capefearstudios.com or call 910-433-2986. 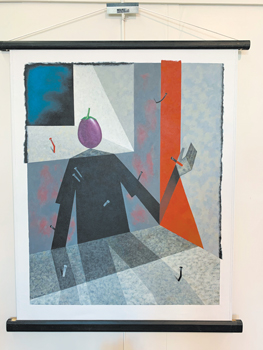