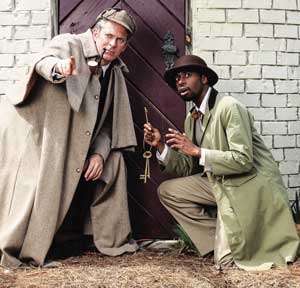 Baskerville: A Sherlock Holmes Mystery, showing at Cape Fear Regional Theatre April 6-25, is a show sure to delight a wide audience — but it will perhaps particularly shine for those who simply love the medium of theater and want to see it utilized to its fullest storytelling potential.

Baskerville, published in 2015, is playwright Ken Ludwig’s take on Sir Arthur Conan Doyle’s beloved 1902 novel The Hound of the Baskervilles. Director Sam French said Ludwig’s approach takes French’s own love of classic storytelling and puts it in “this frame that is so theatrical and so deeply connected to what I do … it’s a classic story, but it’s told by five actors doing all these characters with all these levels of creative whimsy and theatricality … (Ludwig’s script) gives you permission to play around.”

Part of the delight of the world of Sherlock Holmes comes from seesawing between fantastical, unsolvable mysteries and eureka moments of shockingly plain, solid logic. Watson is puzzled by what appears to be a ghost; Holmes discovers and explains that it is merely a sheet blowing through the wind (or something like that, but more cool).

From the very beginning, French worked with his artistic team, including Scenic Designer Lucy Pope and Costume Designer Lizzie Donelan, to build the world of the show in a way that embodies this dynamic. French explained: “One of the guiding principles from early on was figuring out, when are we gonna be really real, and when are we gonna be really intentionally fake? The way we’d always describe it is: Is it a fog machine moment or a moment where we see a person clapping chalk board erasers together to make the fog?”

French decided to generally allow the audience to see the “clapping chalk board erasers” — the strings, if you will — in moments that Sherlock clearly understands what is going on. Conversely, in times when Sherlock is confused, French lets the illusions created onstage remain illusions.

“Sherlock Holmes as a character is all about helping the people in his (world) see that the world is always logical and rational ... they come to him with these really mysterious and elusive problems and he helps them understand how there’s really a very logical answer for everything,” French said. He explained how this reminds him of what theater does. “...We have this sort of elusive mysterious performance thing that we then, in this show, expose the mechanics of and show exactly how it’s all done.”

French said he’s glad his cast members are all up for laughing and just having fun as they figure things out, and that he is grateful for their deep love for theater and this particular show. “If it’s not a fun rehearsal, it’ll never be a good show … It’s a cast with a pretty wide range of ages and experience, but a very unified force of ... joy,” he said.

French explained how it’s interesting for actors Ken Griggs (Sherlock) and Harron Atkins (Watson), because a large amount of the typical actor’s work is already done for them. He explained how as soon as they walk onstage in costume, everyone knows who they are; everyone already has a world of associations tied to their characters and an idea of how they will behave. So the question in working with the actors, French said, is “When do we lean into that tradition and when do we decide to break it?”