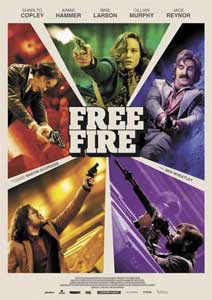 I thought Hollywood had promised all roles related to being criminal in Boston to Ben Affleck, in perpetuity. It just doesn’t seem right to watch all the wacky shenanigans taking place in “Free Fire” (90 minutes) without his Southie accent classing up the joint. The only real information I had about the plot was that it involved an incredible amount of bullets. And, since it was directed by Ben Wheatley (one weird dude) and written by Amy Jump (a super awesome lady), I knew the odds were on it being incredibly bizarre somehow.

The odds were right. Most of the film takes place in an abandoned umbrella factory, and everybody gets shot hilariously, writhes around the floor, swears a lot, does some illegal drugs and (with the lone exception of Brie Larson) has the most fabulously manly facial hair this side of a ZZ Top music video. In fact, up until this film, I always thought Armie Hammer looked like a big cartoon baby. Now, after seeing his Grizzly Man beard, I understand that he is very attractive. Never shave again, Armie Hammer!

The plot is fairly straightforward. Vernon (Sharlto Copley) is meeting two Irish Republican Army guys, Chris (Cillian Murphey) and Frank (Michael Smiley), to sell them many powerful guns. Apparently, this also involves various representatives and intermediaries such as Ord (Hammer), Justine (Larson), Harry (Jack Reynor), Martin (Babou Ceesay), Stevo (Sam Riley) and Bernie (Enzo Cilenti). I am not an expert in arms dealing, but that seems like a pretty long list of dramatis personae for a secret, illegal weapons deal with a terrorist group. I hope the cast gets cut down to a more manageable shortlist before I get confused about which guys are fighting which other guys, or which is supposed to be Justine’s love interest.

Vernon brings the wrong guns, but Chris and Frank maintain their calm and do the deal anyway. Chris does that jerk power play where he asks Vernon a question, then begins firing his new toy loudly and repeatedly to drown out Vernon’s response. This happens at least three times. Since Vernon is clearly odious, I find that less troublesome than I otherwise would. A briefcase of cash changes hands and everyone lives happily ever after.

Except. When the IRA guys load the guns into the nondescript van, Harry realizes that Stevo was the guy who messed with his cousin the night before, and things go south. It starts out pretty hilarious, with Harry demanding satisfaction for his cousin, and Frank trying to figure out how extensive a beating will fit the bill. It escalates pretty quickly until everyone has been shot at least twice. Hilariously, there are still so many people screaming and writhing on the floor at this point. I did lose track of what guys were allies and which guys were shooting at each other. Wheatley and Jump do not make it easy to figure out, either. At random intervals, it seems like Vernon and Ord are either still buddies or planning to put a bullet in each other. Ditto with Vernon and Justine, and several other pairs that keep kissing and making up, right before shooting each other again. It is a masterpiece.

Overall, I got a serious Tarantino vibe from the whole thing. The wildly incongruous, yet perfectly on-the-nose soundtrack probably contributed, as did the snappy dialogue and the fact that most of the movie is one long shootout. I think it is fair to say I quite enjoyed it. In fact, if you have a day off and some cool friends, I encourage you to check out the rest of the Amy Jump/Ben Wheatley catalog. Except “A Field in England;” that one was too arty even
for me.