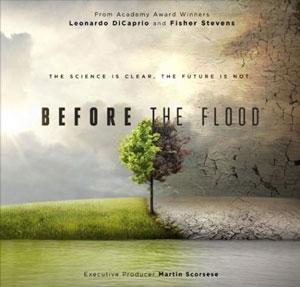 Sustainable Sandhills presents its Sustainable Saturdays Film Series showing of “Before the Flood” Saturday, Sept. 9, at 11 a.m. at the Cameo Art House Theatre.

“‘Before the Flood’ follows Leonardo DiCaprio on his journey concerning climate change throughout the world and his participation in the U.N. climate talk,” said Denise Bruce, environmental outreach manager of Sustainable Sandhills. “He is considered a U.N. ambassador on climate, and he has been a celebrity that has been representative of a number of vital issues before he was famous in the movie ‘Titanic.’” Bruce added that DiCaprio visits communities in India and Miami. The film sums up what will happen to the planet if we do nothing. We need real, actionable policy from the United States and other countries, Bruce added.

“Before the Flood” presents the dramatic changes occurring around the world now due to climate change as well as the actions individuals can take to prevent this disruption of our planet. It urges viewers to push their elected officials in supporting the use of alternative sources such as solar and wind power.

The United States produces more greenhouse emissions per capita than any other country in the world. “What we are going to talk about is how our community here and other North Carolina communities will respond to climate change,” Bruce said. “That includes a climate change resiliency plan, and some communities are willing to do their own policymaking in terms of emission reduction and carbon capture and things like that outside of any federal policies.”

Bruce added that they are hoping to have a couple speakers come in who have a background in climate science to talk about how incidents like Hurricanes Matthew and Harvey will become a more regular occurrence along the coast.

There are many scientists who assert that the planet is in fact warming, and it is because of human activity. Luckily, Bruce said, we are in a place technologically that we can reduce the amount of fossil fuels that we burn while continuing on the track of economic growth and prosperity.

Sustainable Sandhills is an environmental nonprofit that aims to save the planet and preserve the Sandhills’s environment through education, demonstration and collaboration. The Sustainable Saturdays Film Series includes a screening of a film along with subject matter experts who attend and speak on the topic.