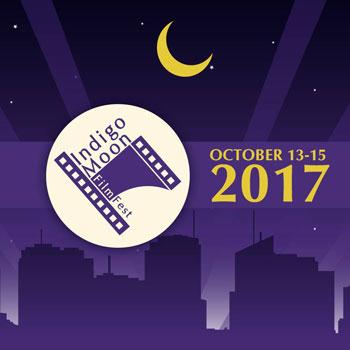 Pat Wright and her partner Jan Johnson head the nonprofit organization GroundSwell Pictures, which was founded in 2014. The organization makes films, shows films, teaches filmmaking and supports filmmakers. It also organizes a summer camp that teaches children about filmmaking. But they wanted more. Before long, they realized that Fayetteville lay in an inexplicable dead zone: There was never a film festival within an hour’s drive. Luckily, they were already equipped with an organization and a passion. That is why Oct. 13-15 , at various venues in historic downtown Fayetteville, the community will be able to enjoy the Indigo Moon Film Festival.

Indigo is meant to bring to mind the word independent, as in indy films, and Moon refers to the phrase “once in a blue moon,” meaning rare or infrequent. Taken together, the title is meant to subtly reiterate Wright’s goal to create “a festival and celebration of the cultural art of film” and to provide the art form that had been so scarce in the Fayetteville community.

Already Wright has succeeded in her goal. The opening night film, “HONDROS,” is sold out and is being scheduled for a third screening due to its immense popularity.

The film is about director Greg Campbell’s best friend, Chris Hondros. Hondros was a 1988 graduate of Terry Sanford High School, started his career at The Fayetteville Observer and ended up being a globally-recognized conflict photographer before he died while on assignment in Libya in April 2011.

The night of the opening film’s screening will be commemorated with a ceremony including food from downtown Fayetteville restaurants and live music. Starting the next day, the festival will show 45 films in just 12 hours. There will be animations, documentaries, fantasy stories, cultural examinations, narrative tales and films ranging from just three minutes long to over and hour. Several directors will be present to discuss their works in Q&A sessions. Experts will also be present to give insights on acting for film and TV as well as how to successfully use crowd funding.

“You can eat, shop, watch films and have a great time without ever having to leave downtown Fayetteville,” Wright said. Furthermore, on the final day of the festival, there will be an awards ceremony and catered barbecue. After the awards are presented, there will be encore screenings of the films that win the audience and judges’ awards. Whatever the need, be it food, film, friends or just to support a hometown nonprofit, Indigo Moon Film Festival has something to offer.

Tickets are $10 per film or $10 per block of 6-10 short films. There are discounts for soldiers, students and senior citizens as well as VIP Passes for $100. The VIP pass covers access to all screenings as well as the price for both the opening night reception and the final awards ceremony. All tickets and passes will be available online until noon Oct. 12. After that, tickets can be purchased at the box office in the Rainbow Room at 223 Hay St. For tickets and more information, visit  www.indigomoonfilmfestival.com.