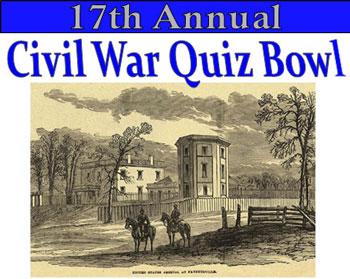 The 17th Annual Civil War Quiz Bowl will be hosted by the Museum of the Cape Fear Thursday, Jan. 25, at Headquarters Cumberland County Library.

Over 200 questions have been prepared for willing and knowledgeable participants. Prizes will be awarded for first place in both the youth and adult categories.

According to Leisa Greathouse, associate curator of education for the museum, the quiz bowl began as a way of “telling more than a museum exhibit can.”

“It struck us how much people like trivia, especially Civil War trivia, so we developed the quiz bowl,” Greathouse said. “In our business, we meet many, many Civil War buffs and thought it would be fun to have a friendly contest where they could see how much they know. A test of their knowledge.”

The quiz bowl accepts up to 20 contestants of all ages. This year, the youngest contestant is 12 years old. Greathouse said that many who participate have done so before, with some having competed in all 17 events.

The format of the event remains steadfast every year. Each contestant chooses a category and is asked a question. If that person answers incorrectly, they receive a strike. When a contestant gets three strikes, they’re out of the contest.

The categories and questions vary from year to year and are determined by the curator of education. The categories this year include “Elementary, My Dear,” “Brief Bios,” “Gettysburg,” “Fayetteville Arsenal,” “Chronology,” “Jeopardy (answer in the form of a question),” “The CW in NC,” “For the Experts,” and “When or Where.”

Greathouse said, “It is the most creative aspect in developing the quiz bowl. Last year, for example, all the categories were named for social media sites. Facebook was one category, and all questions contained a picture of the person or the event. This year, we have named categories that people are more accustomed to seeing. The biggest twist we have attempted to put on the event is asking contestants to phrase their answer in the form of a question in just the one category, ‘Jeopardy.’”

The museum has encouraged participants to register early this year in a “Sign-Up, Study-Up” initiative.

The quiz bowl is especially relevant as the Museum of the Cape Fear transitions into the North Carolina Civil War & Reconstruction History Center. According to the official website, the history center has raised $7.5 million from both the city of Fayetteville and Cumberland County, as well as $5 million from the state. The plan is to renovate and relocate two Civil War-era homes near the Culbreth House to create a period “village.” There is also planning for a Digital Educational Outreach program, as well as the purchase of the existing Poe Rental House. The groundbreaking for its first phase is scheduled for the spring of 2018.

But before our local museum changes into a prominent, statewide history center, it is events like the quiz bowl that will inform the community.

Greathouse said, “By educating people year after year and generation after generation, we are preserving history. But in the end, we want to build a well-educated community. A community of critical thinkers and history-minded individuals who will, at least on occasion, reflect on the past and the lives that lived it.”