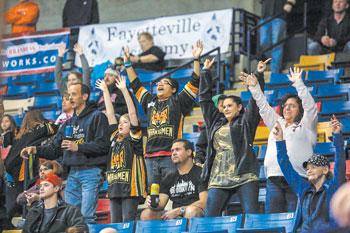 While the Marksmen have struggled at times on the ice this season, the team has certainly managed to make its mark on the Fayetteville community. The Marksmen have seen success in the stands by providing family-friendly entertainment that has developed a steady and passionate fan base.

Those fans enjoyed multiple theme nights throughout this season, including Star Wars Night; a Pooch Party where spectators could enjoy the game with their dogs; and Pink in the Rink, a breast cancer awareness game. Giving back to the community has been a consistent focus at Marksmen games, and so far, the team has given back over $20,000 to local charities and organizations. The team has also paid tribute to the local military community – which inspired the team’s moniker – twice with Military Appreciation Nights, where active duty military and veterans were offered discounted tickets. Those working in education had the same opportunity with the Marksmen’s recent Teacher Appreciation Night.

This month, the Marksmen wrap up their debut season. If you haven’t been to a game yet, the weekend of March 23 and 24 is a great time to check them out. Tickets to these games are on sale for the lowest price of the season, just $5.

Saturday, March 24, the team will celebrate mascot Marky’s birthday with a party featuring other mascots as well as princesses. Marky bobbleheads will be given to the first 1,500 fans.

The final game of the season takes place Friday, March 30, and it happens to be Fan Appreciation Night. Youth tickets are just $2, and fans can expect other surprises and offers throughout the evening.

Follow the Marksmen on Twitter @Marksmen_Hockey to keep up to date on all the in-game action. Follow the team on Facebook @FayettevilleMarksmen for more great content, including the “Best Moments Bracket”, a spin on March Madness that asks fans to vote for their favorite memories of the season.

Facebook is also a great place to learn about ticket packages, like the Dilly Dilly Deal, a package that includes two Marksmen tickets and two 12-ounce beers for $20. Another popular deal is the Friends and Family 4-Pack, which comes with four tickets along with gift cards to some of the restaurants the team has partnered with, including Carrabba’s, Jersey Mike’s, Zaxby’s and more.

With less than two weeks left in the season, don’t wait to join in on the excitement that happens when the Marksmen play. While the theme nights each offer something different, there’s one thing that’s guaranteed to happen at all of them – fun.